You Could Get Paid for Reading This: Interested in Trading Up for a New Kindle Touch or Kindle Fire Tablet? Pull Your Clunker In to Amazon’s Super Lot!

This is fascinating. But even better, you could get paid for reading this post. Sort of.

Click Here to Trade In Almost Any eBook Reader or Tablet 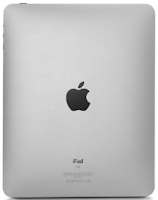 Back in May, we ran an article entitled “Amazon Prepares the Way for the Kindle Tablet by Accepting iPad Trade-ins.” At the time Amazon was offering $245 for my first-generation 32GB, wifi-only iPad, and we called it “an absolutely brilliant step that only it could have taken as a way of preparing the path for the Kindle tablet:”

It extended its relatively unknown Buyback program, previously associated mostly with textbooks, movies, and video games, to include a wide range of electronics products including the iPad, the iPhone, the Samsung Galaxy, the Motorola Xoom, and all kinds of other devices that might — if you could trade them in for a decent sum — prepare the way for you to buy a Kindle tablet, both in terms of the need to replace functionality and the financial wherewithal to make the purchase. Click here to visit Amazon’s Trade-in site.

Now Amazon has taken the logical but equally brilliant next step by extending the buyback deal to just about every ebook reader and tablet that we have ever owned or dreamed of owning — except, at this early 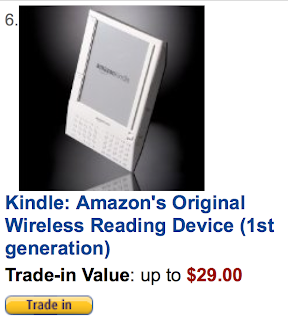 writing, the Nook — beginning with that first Kindle 1 for which you may, like me, have paid $399. As you can see at the right, Amazon’s algorithms initially set a “like new” trade-in price of $29 along with $26.25 (Good) or $18.50 (Acceptable), but those didn’t last long. It may be a good indication of how popular the trade-in program is the Kindle 1 trade-in offer has already, as of this morning, fallen to less than half the original levels at $12/$10.75/$7.

These prices are set not by humans but by what Amazon’s algorithms make of the marketplace, and by Amazon’s formula for balancing the need to pay low enough that it can profit reasonably on a refurbished resale and high enough to make you want to unload the first-generation Kindle and buy a new model. But make no mistake, it’s all about setting you up with one of the new models if at all possible, because those new models — and especially the Kindle Fire tablet — are the ideal content- and commerce-delivery system for just about everything that Amazon sells. 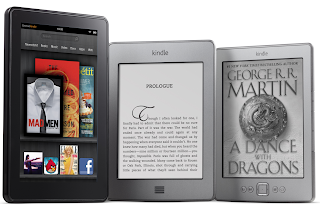 As any auto dealer can tell you, there is a tremendous amount of market power involved in having what is effectively a two-way market, and of course Amazon is far more knowledgeable about relative price elasticity and inventory control than most auto dealers and manufacturers have proven themselves to be. For everyone who has been feeling that very common feeling of buyer’s remorse over having purchased less advanced but higher priced models in the past, even the prospect of a nickels-to-dollars trade-in transaction has to sweeten the appeal of purchasing a new Kindle Fire or Kindle Touch.

Meanwhile, for those who love to watch the ebook reader market and compare the popularity of various devices, it will be fascinating to watch the rising and falling offer prices for over 140 devices (including dedicated ebook readers, tablets, and smart phones) that Amazon has tagged with a “kindle” keyword in its trade-in department.

And meanwhile — as if this is something new — Amazon apparently has it all:

Naturally, thus far we’ve all focused primarily on #1 and #2 above. But we should not underestimate the importance of #3 and #4 in influencing the economics, the retail pricing, and perhaps even the share price of some major competitors, including eBay and Apple.