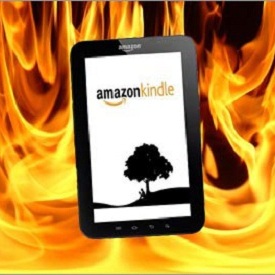 Amazon.com (AMZN) announced second-quarter financial results today, with net sales increasing 29% to $12.83 billion, compared with $9.91 billion in second quarter 2011. Nothing surprising there, as the company has been on an astonishing tear of sustained sales growth for several years.

The big surprise for many was that, in a strong sign that investors are finally beginning to understand what the company is all about, the stock market did not react negatively to the company’s news that its net operating profit fell 96% to $7 million, from $201 million in the year-ago quarter. Amazon also said it expects to lose money in the third quarter or 2012.

It was not long ago that such a financial report would have sent Amazon’s share price plummeting, even if only for a few hours. As of 7 pm EST today, Amazon shares had risen over $2 to $222.40 in after-hours trading, after closing the regular session up $2.96 to $220.01.

For the last couple of years especially, Amazon has been shaving product prices wherever possible in order to build its customer base and market share, while plowing large investments into product fulfillment centers, physical and virtual distribution channels, and manufacturing infrastructure for its various Kindle and Kindle Fire units.

We’ve been saying here at KND for well over a year that Amazon is positioning itself to capture something very close to an unprecedented 50% retail market share across all formats in the U.S. book trades by the end of 2013. In addition to whatever it is accomplishing across its remarkable and relentlessly expanding array of other product lines, we suspect that that kind of market share will have far more lasting benefits for Amazon and its investors than a few million here and there in 2012 quarterly profits.

Attaining that kind of market share will also mean continued and increasing scrutiny of Amazon by the same folks at the Justice Department who currently have their sights trained on Apple and the agency model publishers. Ironically, it’s the combination of that scrutiny and Amazon’s own corporate commitment to innovation, efficiency and its big-tent, customer-experience business model that provides some basis for optimism that its growing market dominance will actually continue to have positive effects for readers, authors, and consumers.

Here are the guts of Amazon’s press release this afternoon:

“Amazon Prime is now the best bargain in the history of shopping – that is not hyperbole,” said Jeff Bezos, founder and CEO of Amazon.com. “We successfully launched Prime seven years ago with free unlimited two-day shipping on one million items. The price of annual membership was $79. Since then, Prime selection has grown to 15 million items. We’ve also added 18,000 movies and TV episodes available for unlimited streaming. And we’ve added the Kindle Owners’ Lending Library – borrow 170,000 books for free with no due dates – it even includes all seven Harry Potter books. What hasn’t changed since we launched Prime? The price. It’s still $79. We’re very grateful to our Prime members, and thank them whole-heartedly for the business and for the word-of-mouth that has made this program grow.”

The following forward-looking statements reflect Amazon.com’s expectations as of July 26, 2012. Our results are inherently unpredictable and may be materially affected by many factors, such as fluctuations in foreign exchange rates, changes in global economic conditions and consumer spending, world events, the rate of growth of the Internet and online commerce and the various factors detailed below.

A conference call will be webcast live today at 2 p.m. PT/5 p.m. ET, and will be available for at least three months at www.amazon.com/ir. This call will contain forward-looking statements and other material information regarding the Company’s financial and operating results.

These forward-looking statements are inherently difficult to predict. Actual results could differ materially for a variety of reasons, including, in addition to the factors discussed above, the amount that Amazon.com invests in new business opportunities and the timing of those investments, the mix of products sold to customers, the mix of net sales derived from products as compared with services, the extent to which we owe income taxes, competition, management of growth, potential fluctuations in operating results, international growth and expansion, the outcomes of legal proceedings and claims, fulfillment center optimization, risks of inventory management, seasonality, the degree to which the Company enters into, maintains and develops commercial agreements, acquisitions and strategic transactions, and risks of fulfillment throughput and productivity. Other risks and uncertainties include, among others, risks related to new products, services and technologies, system interruptions, government regulation and taxation, payments and fraud. In addition, the current global economic climate amplifies many of these risks. More information about factors that potentially could affect Amazon.com’s financial results is included in Amazon.com’s filings with the Securities and Exchange Commission (“SEC”), including its most recent Annual Report on Form 10-K and subsequent filings.

Our investor relations website is www.amazon.com/ir and we encourage investors to use it as a way of easily finding information about us. We promptly make available on this website, free of charge, the reports that we file or furnish with the SEC, corporate governance information (including our Code of Business Conduct and Ethics), and select press releases and social media postings.