DYING TO MAKE A FILM: It Was a Dream Worth Dying For

Like each one of our weekly sweepstakes, next week’s giveaway is sponsored by a talented author, and this time we are especially pleased that he’s offering an engaging one-of-a-kind read for a special promotional price of just 99 cents! Author, actor, producer Sir Ray Mann is springing for the Kindle Fire that could very well end up with your name on it, so it only makes sense to pay it forward and stimulate both your karma and your kranium at the same time by chancing just 99 cents to grace your Kindle with this memoir that has garnered 24 straight 5-star reviews from the discriminating readers of Kindle Nation!

Here’s the scoop on DYING TO MAKE A FILM: It Was a Dream Worth Dying For: 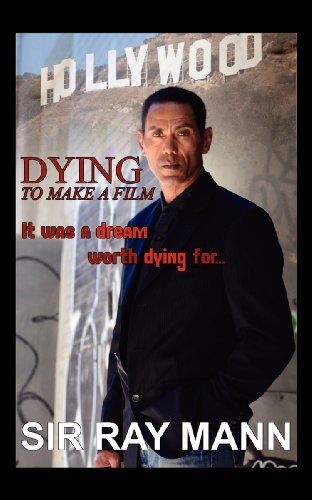 DYING TO MAKE A FILM:

It Was a Dream Worth Dying For
by SIR RAY MANN
5.0 stars – 24 Reviews
Kindle Price: 99 cents
Text-to-Speech and Lending: Enabled

At the age of 23, childhood actor Ray V. Mann is ripped from his seat and thrown overboard into the Atlantic Ocean. Sharks immediately begin to circle. The young man struggles to stay afloat, pleading to be let back onto the boat, but the man above is convinced Ray is a cop. They’re on a drug run, from Cuba to Nassau, and this is a test. The sharks close in and he can’t swim anymore, and as Ray goes under he wonders how it came to this. All he wanted was the money to make his own film. Now all he wanted was to live.

Written with a surprising amount of honesty and levity, “Dying to Make a Film” isn’t just a book about drug cartels, hit men and missing millions. It’s about what it means to do whatever it takes to chase a dream. It’s about not only surviving life’s sharks, but also surviving life’s unattainable promises.

After being pulled back into the boat at the last moment, Ray becomes a trusted member of a Colombian drug cartel that works for the world’s number one cocaine boss Pablo Escobar, shipping hundreds of kilos of cocaine to Miami, Detroit, Chicago and New York City. Between sitting in high-power meetings with some of the most wanted men in the world, Ray scribbles out his screenplay in dark hotel rooms with his gun nearby. Life inside the cartel grows more dangerous by the day, the DEA is hot on their trail, and Ray is forced to jump out of the back of a moving train with two suitcases of cocaine. When three million dollars comes up missing, Ray is fingered as the mastermind, and hit men are deployed. Still, he writes his film, desperate for the simpler life as an actor, and he manages to somehow stay alive.

Years later, he marries an Russian Armenian woman and they have three kids, and after a decade, Ray and his wife separate. Ray goes into a deep depression, and soon he’s sleeping in his car, and then he’s homeless on the streets of Los Angeles. After three years of cardboard boxes and shelters, Ray finds God and an overwhelming compassion to help others. He picks himself up, leaves the street life behind, and forms his own motivational company. Ray is still working on the screenplay.

Ray tells an insider’s perspective of not only the seedy drug world, but also of Hollywood and the streets of Los Angeles. His life takes many literal death-defying twists, but in the end his story ties together in an inspirational and gratifying way.

Author, actor, producer Sir Ray Mann is 53 years old and lives in Los Angeles. He is the cousin of movie producer Tyler Perry, basketball superstar Shaquille O’Neal and boxing legend Sugar Ray Robinson. Ray is also the great-great nephew of tobacco baron R. J. Reynolds. He was born in 1958 in Trenton, New Jersey and in 1972 his parents moved the family south to Fort Lauderdale, Florida where he got bitten by the acting bug.After a push from a high school teacher, Ray began acting in Miami at 16. Almost immediately, he landed tv commercials and roles in films like “The Greatest” starring Muhammad Ali and “Hot Stuff” starring Dom Deluise. From a early age Ray was an avid reader of books and loved to write short stories and at the tender age of just 14 he wrote his first fiction story about an East German man named “Earl Van Ran” who dreamed of ecscaping over the Berlin Wall to freedom in West Germany. For Ray writing and acting would be his door to a big world that he had yet to see. Ray is a member of the Screen Actors Guild, Savvy Authors and Association of Aspiring Authors.