Kindle Nation Daily Free Book Alert, Wednesday, September 29: Kensington Books brings us two great new reads that won’t set you back a single penny, plus Zach Hamric’s Crescent Rising (Today’s Sponsor), “a mix of Cussler, Clancy and Flynn, but with a style and feel all its own,” and Links to Over a Million Free Kindle Titles

Kensington Books brings us “a big ol’ pitcher of Mississippi mystery” from Peggy Webb and a Charlie Carillo offering that sports-writing novelist Mike Lupica calls “The best kind of journey, one you don’t want to end” to head up today’s Free Book Alert….

by Zachary Hamric
Just $2.99 in the Kindle Store

Ryan Black is living a life most men will never know- filled with high-risk adventure in exotic locales, an authentic hero who willingly confronts head-on the life and death challenges found in emerging trouble spots around the globe.
This high impact thriller takes you on a desperate mission to prevent a radiological attack on the United States by Jusef al Sudairy. From mysterious crashes of Soviet-era fighters in California to high-tech naval battles in the Atlantic, the action is nonstop in this first volume in the Ryan Black Series.
Click here

to find out why the first volume in the Ryan Black Series has received 7 straight 5-Star Reviews on Amazon….
Couldn’t Put It Down!

“This book had it all- Nonstop action and a great story line with a couple of unexpected twists. I read a lot of thrillers and this had the right blend of characters and plot. I especially liked the scenes in Miami at the Delano Hotel- I need to meet a guy like Ryan Black!”
Click here

The best kind of journey, one you don’t want to end…funny, moving.-Mike Lupica, New York Times bestselling author of Heat  In Charlie Carillo’s funny, insightful novel, a divorced man gets to know his seventeen-year-old son in a tale that rewrites the book on quality time together. . .  Sammy Sullivan is working his way down the ladder of success. Divorced and pushing fifty, his relationships have the longevity of a fruit fly. But how many men can get themselves fired and have their only son expelled from prep school all in one day? Now, after almost eighteen years, he and Jake may finally get to know each other. (That’s if his ex-wife–the super-achiever Sammy can only dream of being–doesn’t find out.) Jake knows virtually nothing about his roots. So, Sammy shows him the old neighborhood in the far reaches of Queens. But it’s been thirty years. The older woman Sammy lost his virginity to now uses a walker to get around. Most of his hangouts are long gone. It’s dreary, born-to-lose stuff. But Jake is on a mission. Wise beyond his (and his dad’s) years, he doesn’t want his father to miss out the second time around on the good things he blew the first time. And they’ve got a whole weekend together–a journey where Sammy will confront his, dysfunctional childhood and Jake will face a past he never knew he had.  This isn’t your typical father-son story–one is still growing up. The other is his son.  “In the tradition of Tom Perotta, Carillo explores the strength of the family bond, the power of forgiveness, and the hope that comes from embracing second chances. . .truthful, and hilarious.”–Alison Grambs, author of The Smart Girls Guide to Getting Even  “I don’t like funny, touching novels because they make me wish I’d written them myself. I enjoyed Charlie Carillo’s book from beginning to end and now I’m miserable.”–Sherwood Kiraly, author of Diminished Capacity  “A literary romp through the minefields of a totally normal, and totally abnormal, family. . . I actually laughed out loud and kept turning the pages to make absolutely sure that all worked out at the end.”–Cathy Lamb, author of Henry’s Sisters  “Scathingly hilarious and truthful.”–Sally Jenkins

Sixty-One Nails: Courts of the Feyre, Book 1 – Fantasy
by Mike Shevdon – 5 out of 5 stars (2 customer reviews) – Kindle Price: $0.00 Text-to-Speech: Enabled
THERE IS A SECRET WAR GROWING BENEATH THE STREETS OF LONDON.   A dark magic will be unleashed by the Untainted…Unless a new hero can be found. The smarter, faster brother to Neil Gaiman’s Neverwhere has arrived.

Get a Life, Not a Job: It’s Your Time–Make the Most of It

Chips, Clones, and Living Beyond 100: How Far Will the Biosciences Take Us?
Twelve Kindle-Compatible Math and Science Textbooks
Can you imagine a future when high school students can work on their tans, shoot baskets in the driveway, or chill on the sofa while their Kindles read their homework assignments to them? 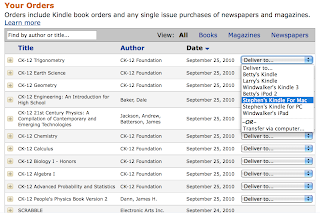 Click here for a separate listing of free and bargain erotica titles for your Kindle.