Kindle Nation Daily Free Book Alert, Thursday, December 30: A “sizzling hot historical romance” and The Blood That Bonds lead 225 free books for your Kindle! plus … Riptide and To Speak for the Dead by Paul Levine of the award-winning Jake Lassiter mystery series (Today’s Sponsor)

Amazon eases into the New Year with two new additions to our more than 220 Free Book Alert listings….
But first, a word from … Today’s Sponsor
“Take one part John Grisham, two parts Carl Hiaasen, throw in a dash of John D. MacDonald, and voila! You’ve got Jake Lassiter.” –-Tulsa Sun

If you’re looking for a taut page-turner with a likeable hard-boiled protagonist and an appealing sense of humor, today we feature not one, but two books from the award-winning Jake Lassiter series. The newest addition Riptide

is being called “a rip-roaring tale in court and on the water,” while the first in the series To Speak for the Dead was voted one of the ten best mysteries of the year by the Los Angeles Times and made into an NBC movie. 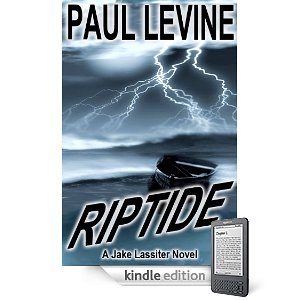 .The reviewers can’t get enough of Paul Levine’s Jake Lassiter Series, and neither can we. Here are just a few of the hosannas from the heavy hitters:
“Mystery writing at its very, very best.” –-Larry King, USA TODAY
“A lively and skilled caper.” –-Los Angeles Times“Sparkles as a mystery and a character study.” –-Ft. Lauderdale Sun-Sentinel.“A highly entertaining yarn filled with wry humor.” –-Detroit Free Press“Wildly entertaining.” –-St. Louis Post Dispatch
Here’s the set-up…

“A thriller as fast as the wind…a bracing rush, as breathtaking as hitting the Gulf waters on a chill December morning.” –-Tampa TribuneSomeone ripped off Jake Lassiter’s favorite client, octogenarian Sam Kazdoy, stealing $1.6 million in negotiable bonds. Then Jake’s old Buddy, Berto Zaldivar, a lawyer-turned-smuggler, ends up dead. The trail of clues from both crimes leads to a sinister professional windsurfer and his companion, Lila Summers, herself a champion athlete and a lethal femme fatale. Jake chases the missing money and the mysterious woman from Miami to Bimini to Maui where, in an explosive finale he learns lessons never taught on the football field or in the courtroom.

To celebrate the 20th Anniversary edition of “To Speak for the Dead,” the first of the Jake Lassiter novels, all author proceeds are pledged to the Four Diamonds Fund, which supports cancer treatment and research at Penn State Hershey Children’s Hospital. “To Speak for the Dead” was honored as one of the ten best mysteries of the year by the Los Angeles Times. A screen adaptation of the book appeared as an NBC movie in 1995.

About the Author
PAUL LEVINE worked as a newspaper reporter, a law professor and a trial lawyer before becoming a full-time novelist. Obviously, he cannot hold a job. Paul claims that writing fiction comes naturally: he told whoppers for many years in his legal briefs. His books have been translated into 23 languages, none of which he can read.

Levine won the John D. MacDonald Florida Fiction Award for his Jake Lassiter series. A Miami Dolphins linebacker turned hard-nosed lawyer, Lassiter appeared in seven novels. He has been described by Booklist as “one of the most entertaining series characters in contemporary crime fiction” and by The Miami Herald as having “a lot more charisma than Perry Mason ever did.”

Levine also wrote 20 episodes of the TV series JAG, which gave him an opportunity to steer a nuclear submarine and land on the deck of an aircraft carrier, all without endangering national security. He has written, with a self-deprecating tone, about beginning his Hollywood career at the advanced age of 51.

Levine is a graduate of Penn State University where he majored in journalism and the University of Miami Law School where he majored in the swimming pool. He passed the Florida Bar exam in his first try in what he suspects was a computer glitch. He was a trial lawyer with the mammoth, filthy rich international law firm of Morgan, Lewis & Bockius, where he did not even pretend to know all his partners’ names. He specialized in “complex litigation,” cases so abstruse that even lawyers charging 500 bucks an hour didn’t fully understand them. Paul tried hundreds of cases and handled appeals at every level, including the Supreme Court. Along the way, he filed expense accounts nearly as creative as his legal briefs.

Levine says he enjoys writing more than lawyering because he no longer keeps time sheets and gets to work in his underwear. He lives in the hills of Southern California, which he claims are populated by rattlesnakes and coyotes, and those are just the Hollywood agents.
More info at www.paul-levine.com.

or TO SPEAK FOR THE DEAD (The Jake Lassiter Series)

to your Kindle, iPad, iPhone, iPod Touch, BlackBerry, Android-compatible, PC or Mac and start reading within 60 seconds!
Each day’s list is sponsored by one paid title. We encourage you to support our sponsors and thank you for considering them.
Authors, Publishers, iPad Accessory Manufacturers:
Interested in learning more about sponsorship? Just click on this link for more information.
Free Contemporary Titles in the Kindle Store