By Steve Windwalker on January 12, 2011 in bargain alerts, reviews 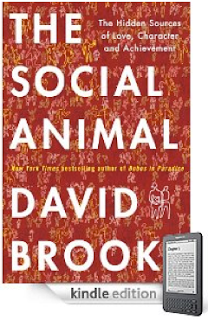 I’ve tried out and subscribed at one time or another to quite a few magazines and newspapers on the Kindle, but the one constant, ever since it became available two years ago, has been the New Yorker. It may not be quite the magazine it was some years back, but it is consistently the best written, most interesting magazine of the hundreds that I have ever read. And this week there’s an absolutely terrific article, excerpted from a forthcoming book, The Social Animal: The Hidden Sources of Love, Character, and Achievement, by conservative columnist and pundit David Brooks of the New York Times.

The book has nothing to do with the usual topics of Brooks’ punditry, but based on the excerpt it is a phenomenally intelligent, witty, well-written and very concrete exploration of what’s really going on, throughout our lives, in the interactions we have with one another. If you’ve ever been through a courtship or a flirtation of any kind, I suspect that you may arrive at the same question that Betty and I reached while reading the New Yorker piece:

How was it that Brooks was there when we first met, and we didn’t notice him?

(Click here for a free 14-day trial to the New Yorker, including this week’s issue and the Books piece. If you decide to stick with it, you can pay $2.99 a month [46 issues a year] on the Kindle or $5 an issue on the iPad.)

By the way, speaking of the New York Times on the Kindle, here’s a cautionary tip: that appealing 60-day free trial they have been advertising will soon be ending if it hasn’t ended for you already, to be replaced by a monthly charge of $19.99. If you want to pay for it, great, but if not, keep an eye out. And the primary New York Times blog that you may have noticed in the Kindle Store for $1.99 is just a hint of the paper itself, in the form of a sprinkling of articles chosen by the editors each day.

Can Rett learn to cope with being saddled with a dimwitted alien mindforce–and keep herself and her platoon alive at the same time? Find out in our Kindle Nation eBook of the Day, T.M. Roy’s Convergence, right in your browser!
Kindle Lending: Now Available For Free Books