84 Five-Star Reviews for Our EBook of the Day, a Unique Vampire Novel About a Vampire Novelist! Read a free sample of “Rabbit: Chasing Beth Rider” without leaving your browser!

Rated over 4.6 stars with 84 Five-Star reviews out of 98 total, our Kindle Nation eBook of the Day is definitely worth a look for readers seeking an adventurous new take — one that will entertain you and make you think — on Vamp-Lit! 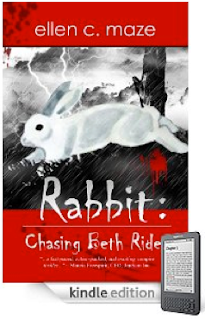 What if your novel attracts the wrong kind of attention and an age-old evil turns out to be all too real?

Author Beth Rider’s second vampire novel has hit number one and she is flying high on her new-found fame. But at a fated book signing that runs late into the night, Beth is confronted by an evil she’d only experienced in nightmares. Jack Dawn, a supernatural monster belonging to an ancient race of bloodthirsty immortals known as the Rakum, vows to track down and kill the young writer because of the vile redemptive message her book is bringing his people.

The Rakum have spread evil among mankind since the Beginning, growing in strength and influence with every passing century. A respected Elder among his brethren, Jack recognizes the novel’s destructive potential and his duty to destroy her before the book’s promises annihilate his Kind. His method of subduing the novelist is an ancient punishment perpetrated against humans who bring them the ultimate displeasure; Jack marks her as a Rabbit. By forcing her to ingest his poisonous blood, Beth’s body now regenerates endlessly and she is set free to be tracked by his hungry brethren. The plan? His people will torture her, slowly, night after night, until she goes insane. Marking her was easy – now Jack only has to sit back and wait for the Rakum to do their worst.
Jack’s proselyte Michael Stone was brought up from his youth to be strong, sensible and oftentimes, brutal. But at one 130, Michael is old enough to appreciate the quiet and ordered life he’d carved out for himself over the years. Aware that his Elder has marked a human for death, Michael is on the lookout as he leaves work late one night. When he stumbles upon the beautiful and apparently innocent Beth Rider, he is instantly smitten, despite the fact that a few seconds later he realizes that she is the target of his Elder’s fury. Puzzled by Jack’s unreasonable condemnation, Michael takes it upon himself to protect the lovely author from the limitless lust of his brethren.
Facing the most terrifying trial of her life against creatures known only in fables, one simple woman will unintentionally threaten the very existence of a powerful and accursed people. In the climactic mêlée, it is a race to the death, or if Beth has her way, a race to the life-of every Rakum who makes the choice.
Reviewers say:
“Rabbit: Chasing Beth Rider” is one of the most original and courageous novels I’ve read in a long time. There’s no way around it, so I might as well just spit it out: this is a Christian story about vampires. Or possibly it’s a vampire story about Christians.
If that offends thee, you might as well stop right here!
I was rather blown away by the book and the way the author intertwined scripture and Biblical teachings with the horrors facing Beth Rider and those she became involved with at the hands of a supposed mystical race (or would that be mythical?)
Visit Amazon’s Ellen C Maze Page

Ellen’s subjects range from vampires to angels to demonic powers in dark places; but her goal is to entertain the reader while sending a message of redemption that is only apparent between the lines. Pitching faith and bloodlust into a battle to the death, or oftentimes, to the life; Ellen always finds a way to balance the two in a fascinating and intriguing way.
A recovering vampire/horror fanatic, Ellen uses her experience in that subculture to bring the Light into the vampire genre. Addicting and delicious, Ellen’s brand of story-telling is rife with deep character study and honest emotion. Building characters that she loves deeply, that sentiment carries to the reader as well. Many readers feel that her writing reads ‘like a movie in their heads’.
Ellen graduated cum laude from Huntingdon College in Montgomery, Alabama with a Bachelor of Arts Degree in Psychology and a minor in Sociology. She has been a licensed non-denominational minister and still teaches Scripture to teens and adults. She has also been a professional artist, specializing in custom pet portraits and equine art.
Ellen’s faith plays an important role in her life and although her novels are written for all people, they are often carried in Christian Markets. She lives in Historic Montgomery, Alabama with her husband, daughter, four cats and one spoiled dog.
And here, in the comfort of your own browser, is your free sample:
IF YOU ARE READING THIS POST ON YOUR KINDLE, JUST ENTER
http://bit.ly/RCBRMaze
INTO YOUR COMPUTER BROWSER TO READ YOUR FREE SAMPLE