By Steve Windwalker on March 13, 2011 in free book alerts
Good news for followers of our Kindle Nation Free Book Alert listings! Our ace partner, programmer, and general wizard Christian H. has installed a fix to keep those bothersome public domain titles from popping up in the middle of our fresh, magical, daily updates of over 200 free contemporary titles in the Kindle Store!

But first, a word from … Today’s Sponsor
With the stab of the demon’s fangs, the priest is transformed from a servant of good to an unwilling agent of evil. Four centuries later this vampire priest grapples with love and and righteousness… 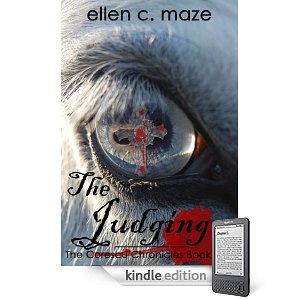 “This is a super Christian vampire tale.”

What happens when you want to do the will of God but are cursed for all eternity?
What the Reviewers Say

Hungary, 1640. A village priest, enamored with his God and loyal to his sheep, awakens to find the village on fire. Searching for survivors, he is confronted by a dark creature with sharp teeth and red eyes. With the stab of the demon’s fangs, the priest is transformed from a servant of good to an unwilling agent of evil.

Present day. Four centuries pass, and Dr. Mark Corescu, that same village priest no longer recalls his origins. Corescu uses his position in the medical community to maintain a mortal façade as he pursues his true calling. Corescu seeks out evil men and women in a ritual he has dubbed the Judging. He condemns and kills them, one a night, feeding his lust on their blood. He feels neither guilt nor remorse. He believes he is serving a Higher Purpose.

Artist and equestrian hobbyist Hope Brannen falls for the doctor at first sight. He feels the same, believing that she has been sent by God to aid him in his divine calling. Hope knows deep down he is not an agent of God but rather a real-life vampire. She turns to her seminary-going pal Tony Agricola for advice.

As the story’s only truly righteous character, Tony recognizes immediately that the doctor has incorrectly discerned the will of God. He agrees to speak to him about the matter, discovering that the doctor has suppressed his past. Slowly the doctor is reminded of his days as a humble village priest, as well as the time he spent in the clutches of the darkest creature imaginable. Steering the vampire down memory lane is difficult and risky but Tony does his best to correct the doctor’s faulty theology. At the same time Corescu’s perfect world is falling apart.

Persevering through dangerous and perilous encounters with the vampire’s immortal contemporaries, Tony shows the vampire the error of his ways. But just because his eyes are opened does not necessarily mean that his ways are easily changed.

“Fabulously frightening! Insanely imaginative!… Ellen Maze delivers an intriguing plot with captivating characters and an extremely natural writing style… I give The Judging

a recommendation of Excellent and will certainly look forward to reading the next installment in the Corescu Chronicles, Damascus Road, as well as Ellen’s earlier work.”
–Rev. Steve Wilson

This book gives us “self-reflection and a sense of hope within the reader, and a call to re-examine the way one views the judging of others and what God really asks us to do in the face of evil in the world.”
–Krisi Keley, Author of On the Soul of a Vampire

Ellen has been writing since she could form sentences. Her earliest works are tucked away safely in her mother’s files, but now, her current work is published for the world to see. Her subjects range from vampires to angels to demonic powers in dark places; but her goal is to entertain the reader while sending a message of redemption that is only apparent between the lines. Pitching faith and bloodlust into a battle to the death, or oftentimes, to the life; Ellen always finds a way to balance the two in a fascinating and intriguing way.

Ellen’s faith plays an important role in her life and although her novels are written for all people, they are often carried in Christian Markets. She lives in Historic Montgomery, Alabama with her husband, daughter, four cats and one spoiled dog.

(or a free sample) to your Kindle, iPad, iPhone, iPod Touch, BlackBerry, Android-compatible, PC or Mac and start reading within 60 seconds!
UK CUSTOMERS: Click on the title below to download
The Judging
Each day’s list is sponsored by one paid title. We encourage you to support our sponsors and thank you for considering them.
Authors, Publishers, iPad Accessory Manufacturers:
Interested in learning more about sponsorship? Just click on this link for more information.
Free Contemporary Titles in the Kindle Store

If you don’t think a New Age healing book could be your next great read, maybe you haven’t checked out this free sample of Meredith Kendall’s Reiki Nurse: My life as a nurse and how reiki changed it
Free Kindle Nation Shorts — March 12, 2011: An Excerpt from Qi (Book of the Baba Yaga) by Elizabeth A. Svigar