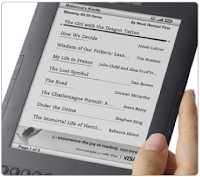 The world, or at least the Kindlesphere, may be made up of two kinds of people:

If you are a fan of Groupon, Living Social, Woot, or the Amazon Deal of the Day, but you also love to read and you don’t want to be distracted by advertising while you are reading an ebook, the Kindle with Special Offers could be just right for you.

But if you have ever spent a significant amount of time getting yourself on “Do Not Call” lists or filing spam reports or complaining to your public radio station that you don’t want to send their expensive roses to anybody on Valentine’s Day, it might be best for you to choose another Kindle or stick with the Kindle you already have.

Actually, there are probably still plenty of people in the “undecided” column, and I can say from personal experience that there are probably quite a few people in both of the camps I tried to describe above. There will be plenty to sort out with this latest Kindle, which is a good reason why we have been listening to our readers’ views and making our own notes over the past few days in an effort to share some useful information and perspective.

First, let’s make it clear what we are talking about here: On Monday afternoon, Amazon announced what it called a “new” Kindle, at a new (and rather strange) price of $114. The hardware and wi-fi connectivity is identical to the $139 latest generation Kindle Wi-fi model

. The “new” $114 unit will do everything that the $139 model will do, but it will also include what Amazon calls “offers.” The somewhat ungainly name that Amazon has given the $114 unit — which will not ship until May 2 or May 3 — is the “Kindle with Special Offers.”

Here’s a link to the bulletin post that we ran at the time, which included Amazon’s press release:

Like many of Amazon’s business innovations, regardless of whether they are Kindle-related, the new offering has generated significant controversy in the early going among bloggers and visitors to various online forums. Much of the controversy revolves around just what Amazon means by Special Offers:

The day after Monday’s announcement I posed this question on the Kindle Nation Facebook page:

What do you think of the new Kindle for $114? Do the “special offers” make it more, or less, appealing? If you already have a Kindle, do you wish you had waited for this one?

We had about 30 responses in the short period of time the question was front and center on our Facebook page, and I felt they did justice to the things that large numbers of people were thinking.

As for me, I’m inclined to think of the Kindle with Special Offers as sort of “half brilliant.”

I guess that I see kind of a strange fault line in public sentiment on marketing. All of us boomers who grew up on commercial-cluttered network TV have managed to train ourselves and each other to hate spam with evangelical fervor, but the successes of eBay and Amazon Marketplace and Groupon and Woot and LivingSocial all prove pretty clearly that there are also huge numbers of us who loooooove deals, especially deals that dress us up in some sort of “Members Only” jacket. It can be hard to keep the distinctions straight — for instance, the old prohibitions against advertising by public radio and television stations and doctors and lawyers certainly can’t be said to exist in the same ways any more.

Groupon has certainly proven there’s a business model there, so now Amazon’s taken the natural next step after investing in Living Social and Woot, and come up with a Kindle offering that — whatever else it may be — is a delivery system for such offers. I do believe that part is brilliant in terms of the total concept, and I expect that within a year we owners of all the other Kindles will be given a chance to opt in to special offers. And many will opt in. After all, as a member of Groupon and LivingSocial I can say that once or twice a week or so I see deals offering 50 to 60% off of what I would willingly pay for things that I actually want.

But the flip side here is that Amazon has been a little tone deaf in the roll-out.

But I understand that there’s a delicate balance that Amazon is trying to achieve here. As is evident from some of the responses above that people posted on our Facebook page, there will be plenty of people who buy this new Kindle in order to save $25. Some of them will be fine with the special offers and sponsorships, and some will quickly become fed up.

There are plenty of smart people who are saying “Maybe I would bite if the discount were $50.” And a lot of us wondered why Amazon hadn’t dropped the price to $99, which would obviously be a much more appealing price point.

But that’s exactly what Amazon did not want to do, at least not right off the bat. If they get a lot of people buying the “new” Kindle only because of the price break, those folks will have a higher resistance and a more negative response to the special offers. If, on the other hand, most of the people who buy the “new” Kindle are interested in or intrigued by the deals, and Amazon starts out with a fantastic array of specials in the first couple of weeks, the Kindle with Special Offers is likely to be a great success in at least two ways:

The “new” $114 Kindle with Special Offers won’t ship until May 2 or 3, and that three-week shipping gap will give Amazon a chance to pay close attention to the response and tweak the user experience if they are so inclined. But for all of us who are wondering where this will lead, we’ll just be guessing until customers actually have the “new” Kindles in their hands.

As for me, I tend to be a grumpy curmudgeon with respect to most advertising. I am channeling Mr. Ashley, whose lawn I used to mow on Saturday afternoons when I was 12. He was a great guy, well into his 70s, and it seemed like he popped Nitroglycerine every 20 minutes for his angina. When I finished his lawn he’d give me $1.25 and invite me for a cold lemonade and a few innings of the Red Sox game. I had never seen a remote control device before and I was amazed to see him mute the beer ads between innings. And the car ads, andsoforth. Like Mr. Ashley, now, I game the system, mute the ads, use the DVR, try to block out ads when I am at the movie theater, block pop-ups on my computer, use the spam filter on the Viagra ads, etc.
But I know quite a few smart, serious people who are addicted to Groupon and LivingSocial and scarf up more coupons than they will ever use. What they love are deals that 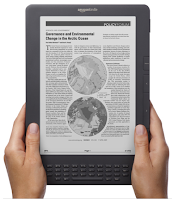 are suited to them, I guess. They don’t think of them as ads or spam, and they don’t spend much time fine-tuning the analogies with respect to what is or is not like TV advertising or NPR underwriting or whatever. It’s just beyond most of our bandwidth to worry much about that.

And what most of us do with ads and spam and deals and offers is define our own boundaries, and since the “new” Kindle is opt-in, I’ll be surprised if many actual customers end up being upset with their actual experience, as opposed to what they fear it may be leading to, or what they hear about it in the media, etc.

Which is why I still think it is half-brilliant. And I’m intrigued. And I haven’t ruled out pulling the trigger on one. After all, if I’d had the “new” $114 Kindle with Special Offers in hand this morning, it probably would have told me about the Amazon Deal of the Day … the today-only price cut from $379 to $299 on the latest-generation Kindle DX!

Kind of makes you wonder what’s coming next month, doesn’t it? Which may be the biggest cause of friction for Amazon’s efforts to sell either the $114 Kindle or the $299 DX.

Kindle Nation Daily Free Book Alert, Friday, April 15: KISS ME, STRANGER and WALKING ON BROKEN GLASS Now Free on Kindle! plus … Think “Shakespeare meets Being John Malkovich meets Back to the Future” and you’re all set for Andrew Delaplaine’s THE TRAP DOOR (Today’s Sponsor)
Today’s eBook of the Day is a Must-Read “Coming of Age” Novel Set in Hard Times: Barbara Hacha’s Line By Line — Just $3.99 on Kindle, and Here’s a Free Sample!

8 Responses to On the New $114 Kindle with Special Offers, The World is Made Up of Two Kinds of People