Commissioner of Indian Affairs Brad Randall heads west in 1878 to reunite his former lover Eden Murdoch with her long-lost son. Eden creates powerful enemies when she fights to protect the sacred Solomon Spring from a mogul’s plans to to build an exclusive spa on the site.


The healing waters of the Solomon Spring hold no miracle cure for murder…
— A child custody battle turns deadly on a windswept winter prairie in 1878.
— A man begins a quixotic search for lost love in an effort to mend his shattered life.
— A sacred Native American shrine is about to be defiled, but not if one determined woman can stop it. 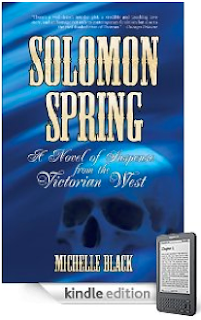 These three seemingly unrelated stories collide at the Solomon Springs natural wonder held sacred for centuries because of its legendary healing properties. Murder shatters the spiritual calm that is Solomon Spring.


Seeking solace from the turbulent life she has led, Eden Murdoch returns to the Solomon Spring. The tranquility of this timeless place will soon be corrupted by a local businessman who plans to exploit the sacred waters of the Spring. Eden’s earnest fight to prevent this sacrilege is interrupted by her own past. Brad Randall, her one-time lover, arrives with the astounding news that the infant son Eden lost fourteen years before has been located and is living nearby.

The joy of her reunion with her son and with Brad, is clouded by the reappearance of her long-estranged husband, Lawrence Murdoch, who seeks sole custody of the boy and of the prosperous ranch the boy will inherit from his adoptive father. The warring couple engages in a vicious battle, both legal and emotional, with an unexpectedly deadly outcome.

Publishers Weekly wrote:  Credible and engaging characters, particularly the fearless and feisty heroine, Eden Murdoch, together with a well-paced, suspenseful plot, make for a fine historical adventure yarn in this sequel to Black’s An Uncommon Enemy (2001).

In Kansas in 1878, the Cheyenne are facing starvation since the Bureau of Indian Affairs has failed to send them the food the government promised. When Eden’s true love, Brad Randall, who’s the Commissioner of the Bureau of Indian Affairs, can’t persuade his superiors to take action because of budget cuts, he decides to go West to see the situation for himself. Ironically, Eden, who hasn’t seen Brad in years, heads for Washington to get his help to prevent a dastardly land developer from desecrating the Cheyenne’s sacred spring, famous for its healing properties, by bottling the water and selling it.

Some mystery fans may be disappointed that the murder plot occupies only the book’s last third, but other readers won’t mind, finding too much else to enjoy.–Publishers Weekly

Booklist wrote:  The strong characters, the love between the two leads, the vivid details of life in the West in the late 1800s, and an engaging plot combine to make this an absorbing historical mystery. Sue O’Brien, Booklist