If you liked former Kindle Nation sponsor Lucy Kevin’s Falling Fast (A fun contemporary romance about secrets, reality TV … and unexpected love), you’re going to love the chance to see sparks fly when you pick up another of contemporary romance titles absolutely free at the top of  this morning’s 40+ new additions to our 300+ Kindle Free Book Alert listings….

Can a cynical college professor and his two rebellious teenagers find the missing 58 quatrains of Nostradamus in time to stop a terrorist attack on the United States, and will anyone believe them? 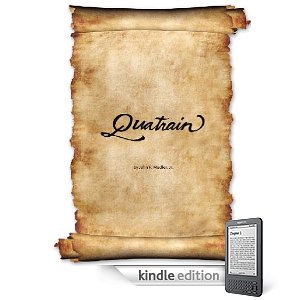 “This is the best book I have read in the last five years!” –Chip Keating

In 1557, Nostradamus published his famous prophetic opus entitled Les Propheties–a collection of four-line, rhyming verses called “quatrains.” The original set was supposed to have 1,000 prophecies. However, only 942 have survived. 58 quatrains have been lost in the annals of time…..until now.

Can a cynical college professor and his two rebellious teenagers find the missing 58 quatrains, or rhyming verses, of the 16th Century Nostradamus in order to prevent a massive disaster?

“What a Find – This book keeps you on the edge from start to finish. Switching from the 16th century Nostradamus and his family to present day terror plot. Just when you think you have someting figured out – you haven’t. Secret codes and Raps – it’s all there. Can’t wait for a sequel.”
–amrjack


“There’s a new force to be reckoned with in historical fiction, and his name is John Medler. Look out, Dan Brown, because coming up fast in your rear view mirror is a very talented and historically exacting author who is making a name for himself with his superb first work, Quatrain. I was hooked from the start by this amazing tale and read it from cover to cover in an instant. I can’t wait for the movie.”
–Mike Hunt

John Medler is an author and trial lawyer and lives with his wife Tammy in St. Louis, MO. He is the author of Quatrain

, a historical fiction thriller about the lost prophecies of Nostradamus, as well as The Mommy Mole, an illustrated children’s book on international adoptions. He is the recipient of the Golden Quill Writing Award, the William Pomerantz Trial Prize and the Lewis Powell Trial Award. He was recognized as one of the State’s Up and Coming Lawyers. He is the former General Attorney for AT&T and now works with his wife representing people who have been injured or killed in accidents.

He has three boys and three girls. One of his girls was adopted from Russia and another girl was adopted from Guatemala. He enjoys watching his daughter’s dance recitals and playing Scrabble with his sons. John is also the recipient of the American Red Cross Lifesaver Award, as a result of saving his boss’ life after the boss had a heart attack in the office. John is not good at golf.

UK CUSTOMERS: Click on the title below to download
Quatrain
Each day’s list is sponsored by one paid title. We encourage you to support our sponsors and thank you for considering them.
Authors, Publishers, iPad Accessory Manufacturers:
Interested in learning more about sponsorship? Just click on this link for more information.
Free Contemporary Titles in the Kindle Store