The old country song about how the gals or guys all get prettier at closing time may or may not be true, but we think you’ll agree that “Opening Time” for the month of June seems to have brought us not only quantity — with 13 new freebies! — but quality, with a great list of appealing fiction and nonfiction that is definitely going to add at least half a dozen Kindle Free Book titles to my “must-read” list! How about yours?

Just in time for Father’s Day!

Why is Ray Romano, star of “Everybody Loves Raymond,” laughing so hard? Because he agrees that Greg Schwem is a comedian who knows how to put his family frustrations onto the page in a way that any current or formerly low-tech adult can relate to… 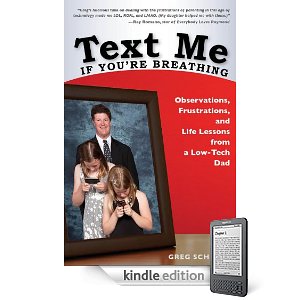 “Greg’s hilarious take on dealing with the frustrations of parenting in this age of technology made me LOL, ROFL and LMAO (my daughter helped me with those).”
–Ray Romano, star of “Everybody Loves Raymond”


Text Me If You’re Breathing

.
You know he doesn’t really need — or want — the socks, the ties, or the Old Spice. This Father’s Day, get him laughing ’til the beer comes out of his nose!

What does a dad do when his daughter asks Santa for a Wii Fit and a 4G iPhone?  The answer is simple:  laugh!  In Text Me If You’re Breathing

, stand-up comedian and technically challenged dad Greg Schwem accounts his mishaps and struggles with parenting in today’s digital world.  Whether accompanying his daughter to the New York City Apple store, purchasing a “high-tech” swing set, “tweeting” while coaching Little League or trying to lay down cell phone rules, Schwem shows readers that technology, while complicated, can be hilarious.  Along the way Schwem also aims his barbs at Tiger Woods, the Consumer Electronics Show, in vitro fertilization, the National Spelling Bee and the movie Avatar.  Insightful, heartfelt and always funny, Text Me If You’re Breathing

is proof that parenting will never come with technical support.


What the Reviewers Say
“A great fun read.  I bought this book after seeing Greg’s stand-up comedy act in Chicago.  The chapter on The Joy of Sex with 20 Specialists had me laughing until I was crying.”
–Deborah Correnti

“What a delightful book, full of laughs and a sneek peak into the real life of a Comedian. Had to order 12 books to give to friends and family.”
–R. Schmitz

“What does it take a working mom to finish reading a 212 page book…a vacation! Kudos to Greg for capturing life’s perceptions in a book, and giving me a much needed laughter break.”
–Cathy Beckman

Greg Schwem is a corporate stand-up comedian and humorous business speaker. He has performed for companies including Microsoft, Cisco Systems, United Airlines, Motorola, IBM and McDonald’s. Greg also has appeared in concert with the likes of Celine Dion, Jay Leno and Julio Iglesias. His comedy bits about business and technology can be heard regularly on XM Radio’s Laugh USA. “Text Me If You’re Breathing”

is Greg’s second book and was written after he struggled trying to master text messaging lingo, iPod transfers, Nintendo Wii and a myriad of other technologies that his children handle with ease. Visit Greg on the web at www.comedywithabyte.com

UK CUSTOMERS: Click on the title below to download
Text Me If You’re Breathing
Each day’s list is sponsored by one paid title. We encourage you to support our sponsors and thank you for considering them.
Authors, Publishers, iPad Accessory Manufacturers:
Interested in learning more about sponsorship? Just click on this link for more information.
Free Contemporary Titles in the Kindle Store