Long before there was LA Noire,
there was LA Noir.
Al Roberts is up for parole, and Jimmy O’Brien, LA lawyer to the dregs of society, is picking up some walking-around money by handling the parole hearing.
In today’s gritty 11,000-word excerpt, witness the overwhelming evidence against Roberts.  Then you’ll begin to learn what really happened in Jeff Sherratt’s LA Noir novel DETOUR TO MURDER as O’Brien goes up against the system to uncover a crime that reaches to the underground power players in the city. 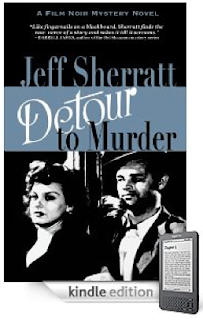 In 1945, the semi-nude body of a woman is found in a two-bit Hollywood motel, a telephone cord wrapped around her throat; face frozen in a grimace of horror. The stolen car of a murdered motorist is parked in the motel parking lot, the owner lying broken and dead on the side of an Arizona highway.

Jimmy O’Brien, defense attorney to the dregs of the criminal world, must find out why. Why did Roberts give a false confession? And why has he waited 29 years to tell the truth? O’Brien digs into the past, igniting a powder-keg that threatens to expose the long-held secrets behind Detour, the iconic Hollywood film documenting Roberts’ story. Secrets that could destroy the underground aristocracy that has held power in Los Angeles, city of broken dreams, for years.

Jimmy’s ordeal takes him from the bleakness of Roberts’ prison cell to the seedy streets of Hollywood, frantically searching to find out who took this DETOUR TO MURDER.