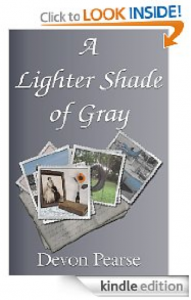 Here’s the set-up for Devon Pearse’s A Lighter Shade of Gray, 20 straight rave reviews and just $2.99 on Kindle:

What does it feel like to stare into the face of madness? Or to anticipate your own? Would you drive away your only love? Could you pretend it didn’t matter? How far would you go to protect a friend, or to avenge a death?

Ten years ago, Devon gave up the love of her life, fearing she would one day fall victim to the mental illness that has slowly ravaged the mind of her mother, who is now being cared for in a private facility.

Just when it seems Devon might have a chance to make up for past mistakes, her best friend Cass becomes a suspect in the murder of her sister’s drug-dealing boyfriend. Devon knows Cass is lying about the details of her involvement and the lead detective on the case, convinced that Cass is guilty, is relentless in his pursuit of justice.

When her mother’s young, emotionally disturbed roommate insinuates she knows something about the night of the murder, as well as details from Devon’s own life that no one else is privy to, Devon becomes desperate to uncover the truth before Detective Lake does. As the investigation continues, Devon is led down a path she never expected and forced to face her greatest fears of life and love.

Tangled in a web of lies, regrets and questions, can she find a way to let go of the past and start again? And, once the mystery is solved, can she live with the secrets she’s uncovered?

Join author Devon Pearse in this semi-autobiographical journey through the most heartbreakingly beautiful and deceptively mysterious events of her own life and the lives of those closest to her.

So many intense emotions. As a Vine reviewer for Amazon, I have read quite a few books by first-time authors and I would highly recommend this book as definitely one of the top ten I have read in recent years. — Valeria Matteson

A Brilliant Author. I always look for the author’s picture and when I saw her photo, she looked so young. Well anyway, [in a coffeehouse in St. Augustine] I just happened to look at another table in the corner and saw this young girl sitting there writing. [Gum and Pearse had a brief conversation.] She is a most humble and beautiful person and I met her personally. – David C. Gum

It was a beautiful, emotional and exciting story. I loved how the author intertwined poetry with prose. The characters were extremely well thought out and it was very easy to identify personally with several of them. – Robert A. Kurzweil.

…A story of deception, betrayal, and facing the mistakes of one’s past while dealing with the future, “A Lighter Shade of Gray” is a riveting read that has much to make readers think.
–Midwest Book Review (Oregon, WI USA)

Visit Amazon’s Devon Pearse Page
Devon Pearse was born and raised in beautiful St. Augustine, Florida. As a child, she was surrounded by classic literary works and grew to love and cherish them as dear old friends. It was only natural that she would dream of one day being an author and joining the ranks of the creators of these other worlds, unforgettable characters and thought provoking prose.

Also an accomplished poet, Devon honed her skills while reading the poetry of Thoreau, Whitman, Longfellow, Byron, Shelley, Frost, Poe, and many others. She credits her family with instilling that love of the written word deep within her soul.

Devon’s writing has been described as “Deeply moving and exquisitely lyrical” and she strives to draw her readers into her often heartbreaking and emotionally charged world.

A Lighter Shade of Gray, which is set in her hometown of St. Augustine, Florida, is semi-autobiographical, written in the first person with the author herself as the protagonist. Drawing from events that not only altered her own life, but the lives of those closest to her, including the tragic death of a childhood friend, Devon weaves a masterful tale full of mystery, romance and the truth of living deliberately.

In addition to writing, Devon enjoys afternoons at the beach, listening to a broad range of music, amateur photography, and spending time with her friends and family. Her prized possessions include a 1911 edition of Peter and Wendy and Smiley, her stuffed hyena.

a lighter shade of gray, devon pearse, ebook of the day, kindle for web, sponsor

Announcing Our THRILLER OF THE WEEK, Sponsoring Over 120 Free Suspense Titles in the Kindle Store! Mainak Dhar’s ZOMBIESTAN, 12 out of 14 Rave Reviews, Just 99 Cents on Kindle!
KND Kindle Free Book Alert, Saturday, August 6: Search OVER 900 FREE TITLES by Category! plus … “If you were a fan of Twilight, but found it a too “dumbed” down, a fan of Harry Potter, but were searching for some strong female leads, or a fan of mythology, but find it a bit dry for your taste, then Winterborne is right up your alley.” – Augusta Blythe’s WINTERBORNE (Today’s Sponsor, $2.99)

One Response to Kindle Nation Bargain Book Alert: How far would you go to protect a friend, or to avenge a death? Devon Pearse’s A LIGHTER SHADE OF GRAY, 4.95 Stars on 20 straight rave reviews and just $2.99 on Kindle!