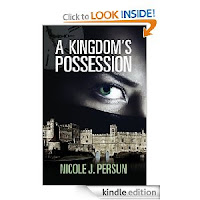 Here’s the set-up for Nicole Persun’s A Kingdom’s Possession, 4 stars and just $2.99 on Kindle:

A Kingdom’s Possession blends ancient magic, love and intrigue in a romantic fantasy told in a fresh new voice.

A wayward prince, his twin brother, a mystical woman of fire, and an escaped slave band together, to free an outcast goddess – if they can
elude a powerful rogue kingdom intent on their destruction.

Max, a young woman who has just escaped a life of slavery, finds herself at the heart of a heated rebellion and a complicated legend. As the kingdom
of Alice seeks power among the realms, a flawed goddess is thrown from the heavens and forced to reside inside Max’s body.

The king of Alice, lusting for the rewards the goddess will grant upon the kingdom that releases her from her human cage, sends spies to capture
Max and release the goddess in the most ruthless way: through death. Will Max and her friends solve the magical riddle before her pursuers?
And what of her budding love for the prince? A captivating tale of love, freedom, and choices.

Nicole J. Persun’s debut novel proves to be an early glimpse into a successful writing career.

Visit Nicole Persun’s Amazon Page
And here, in the comfort of your own browser, is your free sample: