Kindle Nation Bargain Book Alert: This Week Only, Save 25% Off Retail on THE HUNGRY, An Intense 5-Star Apocalyptic Horror Novel by Harry Shannon and Steven Booth

(Ed. Note: I was listening to “Prairie Home Companion” this weekend and Garrison Keillor was talking about zombies and the deliberations of his church diversity committee over whether parish outreach to the zombie community would be appropriate. That’s no typo: Garrison Keillor and Zombies. (Can Richard Ford and Toni Morrison be far behind?) So it has come to this, at long last, and thus it is especially fitting that for this week only, we citizens of Kindle Nation can save 25% off the usual price for this 5-star, no-holds-barred thriller from authors Harry Shannon and Steven Booth. Please don’t say it’s not for you. Just start reading the free excerpt below and see, just see, if you can stop reading.
–Steve Windwalker) 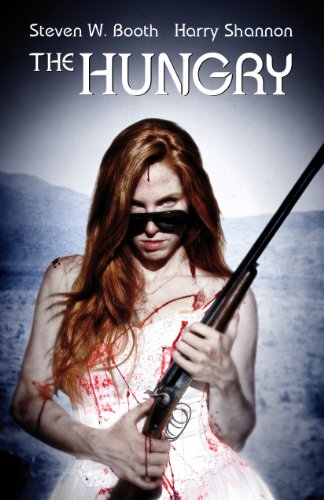 “If you’re craving an apocalyptic horror novel that’s not just wall-to-wall action but balls-to-the-wall intense, Steven W. Booth and Harry Shannon have cooked up a real treat for you. I would say The Hungry will leave you totally satisfied, but that’s not true: Readers will be howling for more more more MORE just like the hordes of insatiable zombies rampaging through this book. ”

—Steve Hockensmith, author of Pride and Prejudice and Zombies: Dawn of the Dreadfuls
Here’s the set-up:
Sheriff Penny Miller of Flat Rock, Nevada, is the kind of woman who will do whatever it takes to protect those she is sworn to serve, even when that includes a murderous biker, her wimpy ex-husband, a unit of incompetent National Guardsmen, and the scientist responsible for releasing the undead upon an unsuspecting world. If you’re one of the tens of thousands of people who read the free short story ‘Jailbreak,’ this is your opportunity to find out what happens after that terrifying first night of the zombie apocalypse. And those of you encountering The Hungry for the first time? You are in for the ride of your life. Aim for the head!
One Reviewer Notes:

“The Hungry is a zombie thriller loaded with sex and smarts. A real nail-biter that brings a new weapon to bear in apocalyptic fiction: Hope. Highly recommended. “

The streets were devoid of human beings, but filled with cars parked at odd angles, some of them still running. Two stray dogs circled in an alley as they fought over something red and dripping. The sidewalks were littered with boxes of groceries and suitcases burst open. It appeared people had been ambushed by neighbors while racing to pack up their cars. Blood trails led nowhere, as newly created zombies who’d gotten to their feet stumbled around looking for someone uninfected to chomp down on. Sheriff Miller ran every red light. She banged the hell out of her fenders as she raced into town. Cursing, she drove the cruiser over the curb and, without slowing, slammed into the tree that stood outside the house that used to be hers.

Tears filled her eyes. Their quiet little neighborhood looked like New Orleans after Hurricane Katrina. Miller jumped when the old oak unloaded a barrage of acorns onto the roof of the Blazer, the sound much like the gunfire of the night before. Her ears were still ringing. She looked through the crushed windshield, across the warped hood of the smashed up Blazer. Her gaze drifted through the pale smoke rising from the cracked radiator. The house looked still and quiet. No broken windows. The dump two doors down on the north side was ablaze, but the flames hadn’t spread. The wind was blowing away from her house. Miller allowed herself to wonder about her ex-husband Terrill Lee’s safety. If he was okay. Could she shoot him if he was now one of… them? Upon reflection, Miller figured yeah, she could.

Miller reached for her seatbelt and winced. She felt her shoulder wound start to bleed again. She pressed her hand over the wound. A wave of dizziness passed over her. She wondered if she had enough energy left to face what would come next. Hell, even to push the door open and get her sorry ass out. She checked herself in the rear view mirror. Her face was filthy. Her eyes looked wild and bloodshot. The beige uniform was half shredded and her hands grimy and covered with dried gore. Makeup wouldn’t have done much good. Another wave of nausea made her bend over the steering wheel.

SNICK. Miller heard the rude, unmistakable sound of a shotgun being racked very close to her head.