Is It Apple Forcing Down Apple’s Hardware Prices, or Amazon?

“Apple’s Lower Prices Are All Part of the Plan,” ran the headline for an interesting piece yesterday by Nick Wingfield of the New York Times.

Wingfield believes that Apple, “once known as the tech industry’s high-price leader,” is carrying out a major strategy change to the point where it is now competing with, and often beating, its rivals on hardware prices.

I’ll have to admit that despite some interesting anecdotal pricing comparisons made by Wingfield, I’m not feeling him. Yes, Apple has certainly shown some signs that it is pulling back some on its hardware prices, and those prices could soon collapse by 30% or more due to forces entirely outside Apple’s control. We’ll get to that, but it is unlikely that such a collapse would reflect Apple’s strategy. 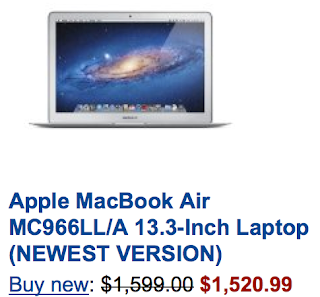 To conclude that Apple has a real commitment to competitive pricing in its corporate DNA, we’d have to see a lot more evidence of significantly  lower prices on mainstream hardware items like the iPad, the iPod Touch, and the various workhorse Macs (as opposed to boutique products like the MacBook Air or carrier-subsidized products like the iPhone.)

It could happen. But to suggest that Apple management will be in the driver’s seat applying the gas on such a strategic transformation is to ignore a number of powerful forces that leave Apple few options.

For starters, let’s look at the tablet market, which it is entirely fair
to say was created through the innovative brilliance of Apple and its
late leader Steve Jobs. The brilliant success of the iPad — both in its elegance and in its acquisition rate by the public — made fierce competition inevitable. So while iPad sales continue to grow dramatically quarter over quarter, iPad’s overall tablet market share fell from 95.5% a year ago to 66.6% in the third quarter of 2011, FierceWireless reported Friday. Nothing truly stunning there; it’s a pattern one could expect to see in any new market as it begins to mature.

A little more of a jaw-dropper is that the market share for the various Android tablets on the market — including devices from HTC, LG, Motorola, Samsung, Acer and Dell — grew from 2.3% to 26.9% in the same period.

Now, in the fourth quarter of 2011, the Android market share is likely to grow even more dramatically with the launch of the Kindle Fire tablet, priced at $199 and capable, Amazon clearly believes, of doing everything an iPad can do except for the things that only a few people really care about.

If the Kindle Fire hits the hardware sweet spot once people have it in their hands, it could quickly become the single most coveted holiday gift for smart grownups this year at that $199 price, and that price and popularity would constitute a very powerful if traditional pressure on the $499-to-$829 iPad price structure. 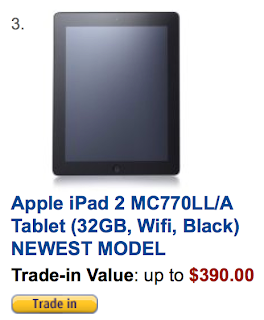 But there is another set of pressures forming just now that could totally pull the rug out from under iPad prices. As we reported last week in our post Interested in Trading Up for a New Kindle Touch or Kindle Fire Tablet? Pull Your Clunker In to Amazon’s Super Lot, Amazon is now investing website real estate and an aggressive marketing campaign to create its own secondary marketplace for virtually all tablets and ebook readers. If Amazon can succeed at enticing thousands of the customers whom it shares with Apple to trade in their iPads and iPod Touches for the 30% to 40% offers now on the Amazon website, those trade-in units could stake Amazon or its “Warehouse Deals” subsidiary to an off-price inventory that might, in time, create an entirely new form of downward pricing pressure on Apple.

What’s really going on here? Obviously, an important part of Amazon’s motivation is to give its customers as much incentive as possible to buy its latest-model Kindle Touch and Kindle Fire units, and regardless of what you paid originally for an iPad it’s a compelling proposition to be able to trade it in now for a brand new Kindle Fire and actually have money left over.

But there could be another mission for Amazon, one that could well influence the economics, the retail pricing, and perhaps even the share price for a competitor such as Apple over the next few years. It’s easy at this point to think that Amazon’s new two-way hardware market will be dwarfed in scale by Apple’s front-door production and retail power.

But Amazon knows better than anybody the effects that its Amazon
Marketplace secondary market for new and used books had on competing
booksellers and publishers over the past decade. Some in the publishing
industry believe that Amazon’s customer-friendly innovations actually
destroyed billions of dollars in corporate wealth, even if it also
fueled tens of thousands of small and often home-based businesses.

It is clear that Amazon has always been the latter kind of company, and equally clear that Bezos feels that Apple has been the former kind of company both generally and in its activities with the Big Six publishers to create the “agency model” to fix ebook prices at higher levels than Amazon wanted to charge.

If Apple now seems to be in a state of transition from the former kind of company to the latter kind of company, it remains to be seen whether the transition is “all part of Apple’s plan” or, at least in some significant part, the result of an impressive array of economic pressures that Amazon’s innovations are bringing to bear on Apple.

Note: it happens every 90 days or so, and this afternoon Amazon will report its quarterly earnings after the close of the markets, with the usual conference call scheduled at 5 pm Eastern. Apple reported its earnings last week and apparently disappointed investors. Amazon may well do the same in the short term, but the company’s commitment to low margins could well be leading it to a promised land in which it could gain as much as 50% of the U.S. trade book market by 2013.