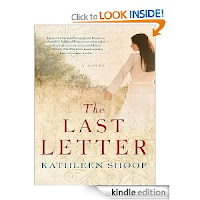 Katherine Arthur’s mother arrives on her doorstep, dying, forcing her to relive a past she wanted to forget. When Katherine was young, the Arthur family had been affluent city dwellers until shame sent them running for the prairie, into the unknown. Taking her family, including young Katherine, to live off the land was the last thing Jeanie Arthur had wanted, but she would do her best to make a go of it. For Jeanie’s husband Frank it had been a world of opportunity. Dreaming, lazy Frank. But, it was a society of uncertainty—a domain of natural disasters, temptation, hatred, even death.
Ten-year-old Katherine had loved her mother fiercely, put her trust in her completely, but when there was no other choice, and Jeanie resorted to extreme measures on the prairie to save her family, she tore Katherine’s world apart. Now, seventeen years later, and far from the homestead, Katherine has found the truth – she has discovered the last letter. After years of anger, can Katherine find it in her heart to understand why her mother made the decisions that changed them all? Can she forgive and finally begin to heal before it’s too late?
From the reviewers:
How fascinating!! Inspired by letters written by her great grandmother, Kathleen Shoop has crafted a fictional family tale of secrecy, deceit and torn relations against a stunningly accurate account of life on the prairie before and after the tragic “School Children’s Blizzard” of 1888. — Curt Coulter
It is a gripping story you are sure to love. – lkm
This is the first book in a long time that captured my attention so much that I was up reading late into the night. The characters come alive on the pages and you feel that you know each one personally. — Marcia Lehman
Visit Amazon’s Kathleen Shoop Page

Thank you for reading about me here and for purchasing my novel! I’m married with two children. I’ve been seriously writing for almost a decade although I dabbled much earlier than that! I’ve had short stories published in four Chicken Soup for the Soul books, am a regular contributor to a local magazine, Pittsburgh Parent, and have had essays in local newspapers as well.
I have a PhD in Reading Education and currently work as a Language Arts Coach at a school in Pittsburgh. I work with teachers and their students in grades k-8 and am lucky to learn something new from them every time I walk through their doors.
My first novel, The Last Letter (2011 IPPY Gold Medal–Regional Fiction, Midwest, 2011 Indie Excellence Finalist Award for Historical Fiction and Regional Fiction, 2011 International Book Awards Finalist for Historical Fiction and Best New Fiction), was a fascinating trip through history, punctuated with fictional characters and events. The idea for the story grew from my great-great grandmother’s letters (see My Dear Frank for the complete set of letters!) written during the year of her engagement to Frank Arthur. The beautiful letters are the inspiration for the novel, the seed from which The Last Letter’s characters and their voices grew.
I’ve also written women’s fiction (COMING SOON!) and have written another historical fiction novel (COMING A LITTLE LATER!) set in 1948 in a town not far from Oakmont, PA.
I’m considering revisiting my characters and setting of The Last Letter for a future book, but I hope readers will enjoy the fact I write about varied eras and places and that they will love each book for it’s unique setting and time.

Kindle Nation Bargain Book Alert: “What if fame happened to you?” – ROCK STAR’S GIRL by J.F. Kristin – 4.6 Stars and Just 99 Cents on Kindle!
KND Kindle Free Book Alert for Friday, October 7: THREE (3) BRAND NEW FREEBIES in the last 24 hours added to our 1,100 FREE TITLES Sorted by Category, Date Added, Bestselling or Review Rating! plus … Rosanne E. Lortz’ Road from the West: Book I of the Chronicles of Tancred (Today’s Sponsor, $2.99)