Just in time for Hallowe’en….

Something Witchy This Way Comes 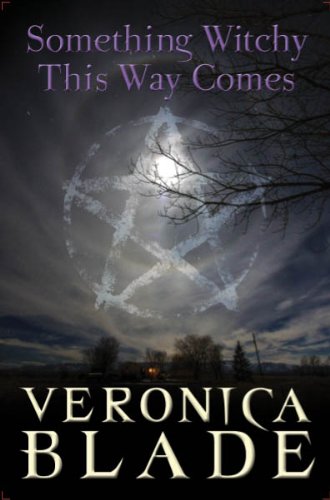 Something Witchy This Way Comes
by Veronica Blade
5.0 stars – 6 Reviews
Kindle Price: $2.99
Lending: Enabled
Don’t have a Kindle? Get yours here.
Here’s the set-up:
Brainiac Tessa McClean’s newly discovered magical powers give her an escape from her self-absorbed parents. But the thrill of being a witch fades when she learns of a rival coven and begins to suspect her own coven’s motives. Evidence tells Tessa to trust one side, but instinct drives her toward the other.
When the school’s scrumptious delinquent, Hayden Anders, offers Tessa self-defense lessons in exchange for tutoring, his timing couldn’t be better. Although hanging out with him is a necessary evil in Tessa’s fight to stay alive, resisting a bad-boy she secretly yearns for might be more than she can manage.
Together, Tessa and Hayden work to unravel the mysteries behind the two covens to discover why they’ll stop at nothing to lure Tessa to their side. She must form an alliance with one of the covens before it’s too late. But the wrong decision could cost Tessa the lives of all who she holds dear — including Hayden.
What Pacific Book Review says about Something Witchy This Way Comes:
We have come to learn about witches from TV, the movies, and of course in literature. Some wiggle their nose and make things change like in Bewitched, others cross their arms and blink their eyes like our favorite genie, while still others wear rounded glasses and attend English manor schooling. Veronica Blade has created her own brand of witches, indelible to the reader’s memory, right from the hallways of a high school in her fanciful novel, Something Witchy This Way Comes.
Guidance and direction, along with comradery and protection all become necessities for Tessa as she realizes just how “special” she is. Infatuated with a bad-ass young man Hayden, the two orbit around each another, forming a symbiotic relationship of survival entwined with acute sexual attraction in such a way the layers of their character development becomes the story and that will keep you glued to the book. This entire novel is written without any use of vulgar language or obscene behavior, a feather in the writing cap of Veronica Blade as she achieves a wholesome and adventurous read for her young adult audiences.
I firmly feel Veronica Blade truly enjoys writing, as she demonstrates an acumen of knowledge understanding the mindset of young adults so well. Mixed into the witches brew a hodgepodge of supernatural powers, high school peer pressures, and the muse of sex emanates an unforgettable cast of characters and incidents. A delightful read, Something Witchy This Way Comes is an ideal gift for a teenager – something to show them witches don’t have to fly on broomsticks; instead they can drive an $80,000 car.

In Maggie Brendan’s Deeply Devoted, a young woman from Holland decides to leave her troubled past behind and start her life fresh in Wyoming as a mail-order bride–staking her future on a man she’s never met.