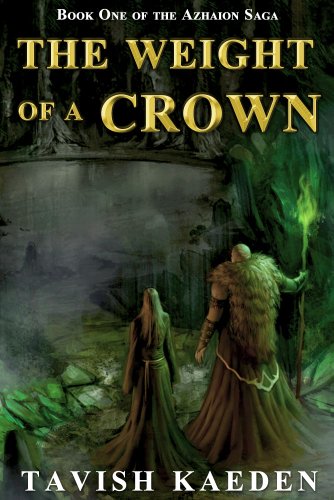 The Weight of a Crown (The Azhaion Saga)
by Tavish Kaeden
4 stars – 1 Reviews
Kindle Price: $2.99
Lending: Enabled
Don’t have a Kindle? Get yours here.
Here’s the set-up:

Thousands dream of it; still more die for it. Yet, how many can truly bear it?

After centuries of bitter conflict the realm of Esmoria is at last united under the banner of a single king. On the surface the realm appears to be enjoying its first taste of peace, but lingering resentment and the untimely death of the new ruler threaten to return Esmoria to political chaos.

Meanwhile, in the farthest reaches of the frozen north, a dethroned monarch’s plot for revenge awakens a long-forgotten evil. As darkness and treachery descend upon the realm, a young escapee from a forced labor camp, a disenfranchised soldier, and an epileptic engraver’s apprentice find themselves at the heart of the troubles.

Already devastated by loss, Bourne is shattered by a report that his last friend in the world, Martin Lindros has gone missing in The Bourne Betrayal. A CI deputy director, Lindros was in Ethiopia tracking suspicious shipments of yellowcake uranium and atomic bomb weaponry. His last lifeline to humanity, Bourne will not let Lindros go. Despite his hatred for CI, Bourne sets out to rescue his friend and finish the job.

tavish kaedan, the weight of a crown