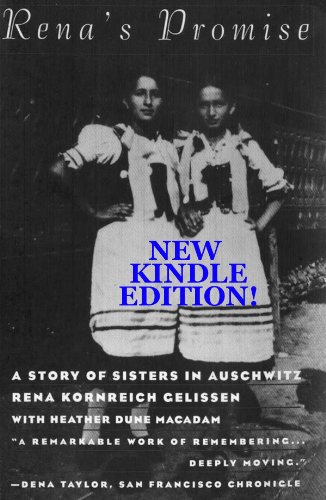 Visit this link to read a 5,000-word Free Kindle Nation Shorts excerpt at no charge.
Here’s the set-up:

“I do not hate. To hate is to let Hitler win.” Rena Kornreich Gelissen

“The most important book of the modern age!” Neal Lavon, Voice of America

On March 26, 1942, the first transport of women arrived in Auschwitz. Among the 999 young Jewish women was Rena Kornreich, the 716th woman numbered in camp. A few days later, her sister Danka arrives and so begins a trial of love and courage that will last 3 years and 41 days, from the beginning Auschwitz death camp to the end of the war.

Rena’s Promise stands out from other memoirs in mere length of time she spent in the camps. No other survivor from the first transport has ever written about her experience and what it meant to survive for so long as a peasant and a hard laborer who spent 10-12 hours a day making bricks, pushing lorries, sifting sand, performing cartwheels…. From her escape from Dr. Mengele’s experiment detail to her surreal meetings with SS woman Irma Grese, Rena tells a dynamic tale of courage and compassion that reminds us of the resiliency of the human spirit, and the power of people to help one another in unimaginable circumstances, be they Gentile or Jew, German or Pole, kapo or prisoner.

Here’s A Free Excerpt From Tracy Sumner’s Tides of Passion, Our Romance of the Week Sponsor
Heads Up! You Have Until Sunday to Enter for Week #4 of Our Brand New KINDLE FIRE Giveaway Sweepstakes, Sponsored by Jack Harney, author of THE MILLSTONE PROPHECY