Kindle Nation Bargain Book Alert: “If you loved the idea of Dan Brown’s bestsellers, but weren’t so crazy about all the arty esoterica, Terrence O’Brien’s The Templar Concordat could hit your sweet spot.” – 11 out of 12 Rave Reviews, Just $2.99 on Kindle! 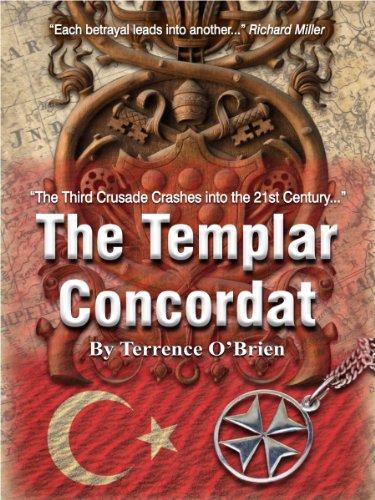 The Templar Concordat
by Terrence OBrien
4.6 stars – 12 Reviews
Kindle Price: $2.99
Text-to-Speech and Lending: Enabled
(Ed. Note: I suppose it’s fair to say that, because of my job here at Kindle Nation Daily, I’ve read Dan Brown’s books out of a sense of duty. I didn’t hate them, but I tend not to be impressed when I feel that an author is trying to impress me with his knowledge of arty esoterica. Whether a novel’s preoccupations are with the 13th century or the 21st century, or both, I think that it’s imperative that story and storytelling come first. And that’s what we get with Terrence O’Brien’s The Templar Concordat — it hit my sweet spot, and I hope it hits yours. That being said, I hope you’ll enjoy this note from Terry to Kindle Nation Daily readers about how he came to write this fascinating book. –-Steve Windwalker, Kindle Nation Daily)

A Note from the Author to Kindle Nation Readers

The idea for the book began to grow a few years ago as news reports revealed more and more about Al Qaeda. What struck me was the fact that it had no national allegiance. It operated outside the established nation state system. Al Qaeda didn’t care what the government of Saudi Arabia, Syria, Pakistan, or Iran thought. It did whatever it wanted, and claimed to be doing it to further world-wide Islam.

So, I wondered what things would be like if there was an organization in the West that was also free from the governments of the West. How would they combat Al Qaeda? What kind of scene would play out across the world if that kind of group challenged Al Qaeda without worrying about media, Congressional hearings, appeals courts, public opinion, or the next election cycle?

Then I remembered there once was such a Western organization when the Knights Templars were active from 1120 to 1307. They answered to nobody, had the strongest military of the day, crossed borders at will, amassed a huge fortune, engaged in trade and commerce, and financed many of the monarchies.

So, why not bring the Templars forward in time, and let some escape the ambush by the King of France and the pope that destroyed them in 1307? And since the Templars were a creation of the Crusades and the Church, let those players come into the present day, too. And the Hashashin, a secretive branch of Islaimi Shiite Islam that excelled in covert operations? Let them escape their destruction by the Mongols in 1275, and come forward to the present day.

I also noticed news stories about the discovery of the Chinon Parchment from 1308 dealing with the Templar trials. The document had been misfiled in 1628 and was lost to history until an Italian researcher found it buried in the stacks of the Vatican Library in 2001. So the notion that things could get lost for hundreds of years in a library was definitely reasonable.

The result is The Templar Concordat. I hope you enjoy reading it as much as I enjoyed writing it.

The Templar Concordat
by Terrence OBrien
4.6 stars – 12 Reviews
Kindle Price: $2.99
Text-to-Speech and Lending: Enabled
Don’t have a Kindle? Get yours here.
When the truth is your greatest danger, and the enemy knows the truth, things can only go downhill. And it’s the proof that the Hashashin get when they steal what the Vatican doesn’t even know it has. Now the infallible decrees of two Twelfth Century popes and three kings, stolen by the Hashashin, threaten to catapult the bigotry, bias, and religious blood baths of the Third Crusade straight into the Twenty-First Century.
Here’s the set-up:
When Templars Sean Callahan and Marie Curtis are drawn into the mess, they face an ancient enemy that has already nearly won the battle, a newly elected Mexican pope being undermined by entrenched Vatican powers, world class scholars who will sell their prestige to the highest bidder, and terrorists lingering over lattes in sidewalk cafes. Moving from Rome to London, Switzerland, and Saudi Arabia, Callahan and Curtis are desperate to find some way to stem the success the Hashashin are having enlisting the majority of moderate Muslims in their Jihad. Out maneuvered at each step by the Hashashin, only a last ditch roll of the dice has any chance of success. But it’s the only chance they have. (122,000 words – approximately 400 pages.)
One Reviewer Notes:

“I loved this book and am still kicking myself for resisting its sirencall for so long. The history and details woven skillfully into the action and well rounded characters made for an exciting read… ”

After leaving the Marine Corps I began a career in mine and oil field development. So, I have followed the oil fields spanning Alaska, Saudi Arabia, and Indonesia, and now live with my wife in Kansas City where I became a floor trader at the Kansas City Board of Trade. I’m currently working on Avram’s Cross, the second book in the series.
UK CUSTOMERS: Click on the title below to download
The Templar Concordat
(This is a sponsored post.)