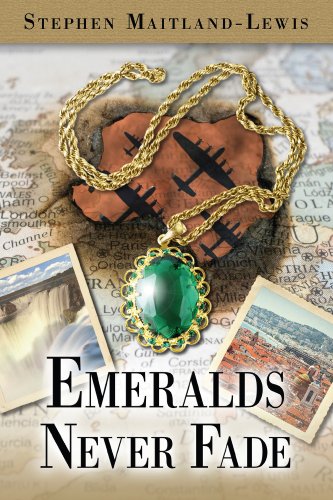 Emeralds Never Fade
by Stephen Maitland-Lewis
Kindle Price: $5.99
Text-to-Speech and Lending: Enabled
Don’t have a Kindle? Get yours here.
Here’s the set-up:

Before World War II, two German boys enjoy playing piano, and one visits each week to teach the other. When the Nazis seize power, the lessons must end — one of the boys is Jewish. Leo Bergner, the Jewish pupil, escapes Germany while his piano teacher, Bruno Franzmann, is called to serve the Fatherland. As the war ends, Bruno escapes to Buenos Aires and Leo begins a career in banking, only to uncover a conspiracy of Jewish persecution that puts him in direct opposition to his beloved Israel, while also jeopardizing his career, his marriage, and his life. In Argentina, Bruno hatches an unscrupulous plot to finance a multi-national corporation, and in time, his efforts require a business trip to London — his first visit to Europe since he escaped. After forty years, a lost family heirloom will decide their fate.

“A poignant story of two men whose lives are forever altered by a period of history that should never be forgotten.” –Robert Dugoni, NY Times bestselling author – MURDER ONE and BODILY HARM

“I couldn’t put it down until the end. It is a page turner — greatly enjoyable and informative. Perfecto!” –Connie Martinson, nationally syndicated journalist and television host of Connie Martinson Talks Books

“A fascinating combination of thriller and psychodrama of an entire era.” –Eric Dezenhall, author of The Devil Himself

“Not only a staggering and grand sweep of history but the fascinating mysteries of the human heart.” –Brad Schreiber, award-winning journalist and author of Becoming Jimi Hendrix