Nine Insights For a Successful and Happy Life 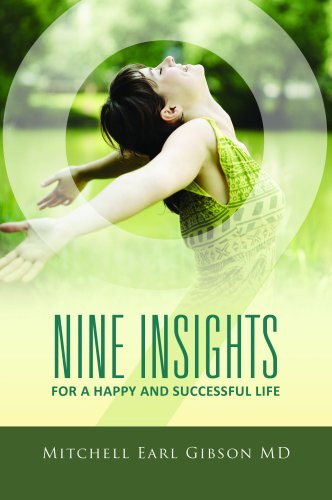 4.4 stars – 20 Reviews
Kindle Price: 99 cents
Text-to-Speech and Lending: Enabled
Don’t have a Kindle? Get yours here.
Here’s the set-up:

The greatest achievements in human history have been attained by those individuals who strive to elevate themselves above the everyday ebb and flow of life. This yearning to achieve is central to our search for happiness. We want to laugh, to sing, and to feel good at the end of the day as much as we might wish to do anything else.

Happiness is an art. If you wish to practice this art, you must first decide that it is something that you want, above everything else. People that choose to be happy will at some point wake up to a day filled with smiles, joy, and laughter. If they are lucky, they will remember that day, focus on its high points, and strive to repeat it. Before too long, another happy day will appear, seemingly out of the blue. People around them will wonder why they seem to be so different. The reason will not be found in surface changes.

The Nine Insights For a Happy and Successful Life emerged from my own life long desire to help thousands of people find happiness. Happiness is a gift that we bestow upon ourselves each time that we embrace the joy that breathes within. This book outlines two main themes that will guide you on the road to happiness. The first explores methods that will help you discover the secret inner joy that already hides within you. The second explores powerful and effective methods that will help you remove the chaos and obstacles that prevent you from feeling and expressing that joy in your daily life.

Success and happiness travel together on the road to joy. Let us discover your inner path together.

Mitchell Earl Gibson MD Dr. Mitchell Gibson is one of the world’s leading authorities on the interface of science, the human soul, and the frontiers of human consciousness. He is the best-selling author of Your Immortal Body of Light, Signs of Mental Illness, Signs of Psychic and Spiritual Ability, The Living Soul, and Ancient Teaching Stories. He has delivered addresses to many of the world’s largest conferences related to science and consciousness. Dr. Gibson has been a consultant for Fortune 500 companies, Hollywood celebrities, professional athletes, A&E Network, NBC, ABC, and CBS regional affiliate television stations, newspapers, radio stations. He has been a guest on hundreds of radio programs and was the host of his own TV show in Phoenix called “The Doctor’s Corner” for more than eight years. He has been a consultant for A&E for a project entitled “The Other Side”. He was also contacted as a consultant by the History Channel for a project entitled “Seekers 2012”. Dr. Gibson was born in Pinehurst, North Carolina on August 24, 1959. He was born to William James and Mary Magdalene Gibson. One of five children, Gibson’s parent’s separated when he was 6 years old and he grew up in Ellerbe North Carolina; a small farming community near Pinehurst. Dr. Gibson received his medical degree from the University of North Carolina at Chapel Hill. He then completed his residency training at the Albert Einstein Medical Center in Philadelphia. During his last year of residency he served as Chief Resident in Psychiatry and received the Albert Einstein Foundation Research Award for his work in Sleep Disorders. Dr. Gibson then moved to Phoenix Arizona where he became Chief of Staff at the East Valley Camelback Hospital in Mesa Arizona. Dr. Gibson has been listed among the Top Doctors in Arizona in the Phoenix magazine on several occasions. He has also twice been named to the Woodward and White listing of the “Best Doctors in America”. In 2003, 2004, and 2005 he was honored with listings in the Consumer Research Council of America’s compilation of the Top Psychiatrists in America. He is a Diplomat of the American Board of Psychiatry and Neurology, the American College of Forensic Medicine, and the American Board of Forensic Examiners. Mitchell Earl Gibson MD 110 Oak Street High Point NC 27260 Email: mgibsonmd@aol.com.

Mitchell Gibson, Nine Insights for a successful and happy life