KND Kindle Free Book Alert for Wednesday, February 1: Check out 75+ free thrillers right now — and 10 chances to win a brand new Kindle Fire — in the BIG KINDLE BOOGIE! plus … You’re in for one heck of an exciting, edge of your seat read with Kindle Nation fave author Joan Hall Hovey’s NOWHERE TO HIDE (Today’s Sponsor – $2.99 and FREE for Amazon Prime Members Through the Kindle Lending Library!)

After you've checked out our sponsor Joan Hall Hovey's thriller NOWHERE TO HIDE, scroll down to see the BIG KINDLE BOOGIE with 75 new freebies by five of our favorite thriller authors, and a chance to win one of 10 brand new Kindle Fires!

PLEASE NOTE: Powered by our magical Kindle free book tool, here are this morning’s latest additions to our 2,200+ Kindle Free Book listings. Occasionally a title will continue to appear on this list for a short time after it is no longer free on Kindle. ALWAYS check the price on Amazon before making a purchase, please! If a book is free, you should see the following: Kindle Price: $0.00
But first, a word from ... Today's Sponsor
This one is a chiller. You won't be able to put it down--guaranteed!
Nowhere to Hide
by Joan Hall Hovey
4.7 stars - 13 reviews
Kindle Price: $2.99
Supports Us with Commissions Earned
Text-to-Speech and Lending: Enabled
Here's the set-up:
Raised in an atmosphere of violence and unpredictability, Ellen and Gail Morgan have banded together, survivors of a booze-fertilized battleground, forming a fierce united front against an often cold and uncaring world. When their parents are killed in a car crash, Ellen becomes the mother figure for Gail.

When fifteen years later Gail is brutally raped and murdered in her shabby New York basement apartment, practically on the eve of her big breakthrough as a singer, Ellen is inconsolable. Rage at her younger sister's murder has nearly consumed her. So when her work as a psychologist wins her an appearance on the evening news, Ellen seizes the moment. Staring straight into the camera, she challenges the killer to come out of hiding: "Why don't you come after me? I'll be waiting for you."

Phone calls flood the station, but all leads go nowhere. The police investigation seems doomed to failure. Then it happens: a note, written in red ink, slipped under the windshield wipers of her car, 'YOU'RE IT.' Ellen has stirred the monster in his lair … and the hunter has become the hunted!
One Reviewer Notes:
This is one heck of an exciting, edge of your seat read! Nowhere to Hide had EVERYTHING you could want in a suspenseful thriller. The character development in this book is unreal. I was actually holding my breath long before the ending. Ms. Hovey has done an incredible job of getting into the mind of a serial killer. If you haven't gotten this book yet, I highly suggest you do. You will not be disappointed as this is one of the best thrillers I have read yet.
Val at
About the Author 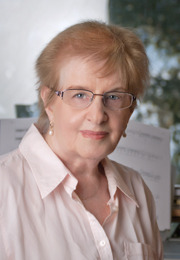 In addition to her critically acclaimed novels, Joan Hall Hovey's articles and short stories have appeared in such diverse publications as The Toronto Star, Atlantic Advocate, Seek, Home Life Magazine, Mystery Scene, The New Brunswick Reader, Fredericton Gleaner, New Freeman and Kings County Record. Her short story Dark Reunion was selected for the anthology investigating Women, Published by Simon & Pierre. Ms. Hovey has held workshops and given talks at various schools and libraries in her area, including New Brunswick Community College, and taught a course in creative writing at the University of New Brunswick. For a number of years, she has been a tutor with Winghill School, a distance education school in Ottawa for aspiring writers. She is a member of the Writer's Federation of New Brunswick, past regional Vice-President of Crime Writers of Canada, Mystery Writers of America and Sisters in Crime.
UK CUSTOMERS: Click on the title below to download
Nowhere to Hide
Each day’s list is sponsored by one paid title. We encourage you to support our sponsors and thank you for considering them.
Free Contemporary Titles in the Kindle Store
Welcome to Kindle Nation’s magical and revolutionary Free Book Search Tool — automatically updated and refreshed in real time, now with Category Search! Use the drop-down menu (in red caps next to the menu bar near the top of the page) to search for free Kindle books by genre or category, then sort the list just the way you want it — by date added, bestselling, or review rating! But there’s no need to sort by price — because they’re all free! 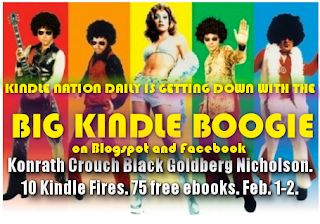 Kindle Nation Daily is proud to be a sponsor of the BIG KINDLE BOOGIE promotion with over 75 free books -- just for today and tomorrow -- from some of your favorite authors: including Joe Konrath, Blake Crouch, Lee Goldberg, and Scott Nicholson! Check out the freebies below for February 1 and 2, and -- gee whiz, can this be true? -- head on over to the Big Kindle Boogie page to enter to win one of 10 brand new Kindle Fires that they are giving away!

Loading
*
*
*For verification purposes only
No summary available...
Read more »

The Power of Now: Conquering Procrastination
By: Norris Elliott
Added:

Report Bad Listing
*
*
*For verification purposes only
OCCUPY GENERATIONS. THE RISE AND FALL OF “OBVIOUS TRUTHS” • What is the American Awakening? • How have Americans become so dumb, so that they have so often voted against their self-interest? Or did they?• What exactly are the Millennial Generation, Generation X, Yuppies, Boomers, the...
Read more »

Report Bad Listing
*
*
*For verification purposes only
This book was converted from its physical edition to the digital format by a community of volunteers. You may find it for free on the web. Purchase of the Kindle edition includes wireless delivery....
Read more »

Report Bad Listing
*
*
*For verification purposes only
This carefully crafted ebook: "The Great Gatsby - The Original 1925 Edition" is formatted for your eReader with a functional and detailed table of contents. The Great Gatsby is a novel written by American author F. Scott Fitzgerald and first published in 1925. It follows a cast of characters living...
Read more »

The Teen Entrepreneurship Textbook: Everything I Wish I Was Taught To Succeed In The Business World As A Young Entrepreneur
By: Brendan Cox
Added:

Report Bad Listing
*
*
*For verification purposes only
"My Double Life was an enjoyable fun page turner. I would highly recommend this book if you're looking for a quirky romcom to get your teeth into as it was brilliant in every way." - Belle Henderson, author of Not The Plus One.Emma McTavish likes nothing better than curling up with a good book.But...
Read more »

My Double Life: A witty, entertaining rom-com about an introverted librarian with a wild side
By: Angela Pearse
Added:

Report Bad Listing
*
*
*For verification purposes only
Boxing is infused with ideas about masculinity, power, race and social class, and as such is an ideal lens through which social scientists can examine key modern themes. In addition, its inherent contradictions of extreme violence and beauty and of discipline and excess have long been a source of...
Read more »

Boxing, Masculinity and Identity: The 'I' of the Tiger
By: Kath Woodward
Added:

Report Bad Listing
*
*
*For verification purposes only
I don’t date football players.I’m not interested in the ones who are a decade older than me. I want nothing to do with the ones who play on the same team as my brothers, and I certainly avoid the ones who spend more time in strip clubs than kids’ clubs.So why do I suddenly find myself faking a...
Read more »

Are You Afraid?: A Thriller And Horror
By: Abrar Nayeem Chowdhury
Added:

Report Bad Listing
*
*
*For verification purposes only
“Don't read this in a public place, you won't be able to stop yourself laughing out loud. It reminds me of Douglas Adams, the careful plotting mixed with those absurdities and jokes that sneak up and make you snort tea through your nose. Hilarious.” Goodreads.What if you really were the centre...
Read more »