Kindle Nation Daily Graphic Novel Readers Alert! Joseph Pignataro’s GODS OF MEN (CHILDREN OF THE APOCALYPSE) – 32 out of 33 Rave Reviews – Now Only $1.99 or FREE via Kindle Lending Library. But Wait! There’s More!!! Enter to Have a Character in a Graphic Novel!!

GODS OF MEN (Children of the Apocalypse) 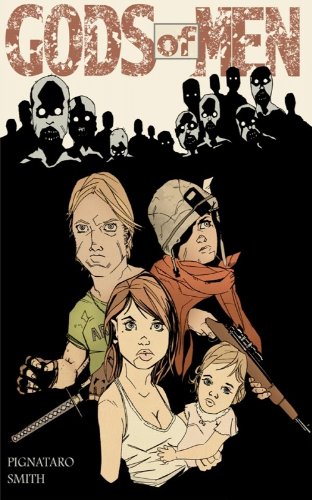 The Gods of Men have had many names, Zeus, Odin, Jupiter, Yahweh, and Allah to name just a few. These Gods have descended upon the earth in their chariots of fire since the dawn of man.  After each visitation they leave things behind, such as our first language and our knowledge of the stars.  What if there was more…

What if these “Gods” return once every few thousand years to lay waste to the planets population as their food supply, choosing only the most powerful civilization at the time to help them succeed?  In return, that civilization would be spared to repopulate the world in it’s image, until they return again thousands of years later…erasing the visitors true intentions from written history.

All the prophecies were right – the world as we know it comes to an end in 2012 with the arrival of the prophesized Wormwood comet that explodes in the atmosphere. The entire adult population of the planet quickly transforms into Wraiths, grotesque former humans out to devour uninfected humans.

Follow young Jack Foster, his trauma induced psychotic ten-year old brother Mason, and baby Lucy as they struggle to survive in a world of Gods and men.

WARNING: These dead do more than just “walk.”

Write a glowing review after your purchase, press the like button, and enter “I wanna be a part of the book!”in the review.  My team will make a character with your name and likeness if you want to be in a graphic novel with thousands of fans and growing!!
Email pignataroj@yahoo.com  your first name and pic!

“Pignataro and Smith have made a fan out of me. I’ve never been much of a comic, or graphic novel enthusiast, but I am now. I highly recommend Gods of Men to those who want to add graphic novels to their Kindle library.” ~ The Kindle Book Review