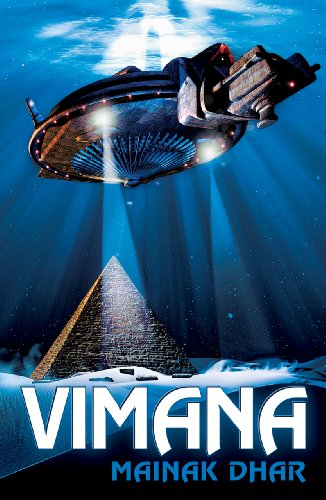 Over 90 Rave Reviews
Kindle Price: 99 cents
Text-to-Speech and Lending: Enabled
Don’t have a Kindle? Get yours here.
*** We announced earlier this week that Mainak Dhar, author of VIMANA: A SCIENCE FICTION THRILLER, is the sponsor of this week’s KINDLE FIRE Giveaway Sweepstakes, which ends Monday. Please check out our Facebook page to enter. ***
Here’s the set-up:

Mainak Dhar is a cubicle dweller by day and author by night. His first `published’ work was a stapled collection of Maths solutions and poems (he figured nobody would pay for his poems alone) he sold to his classmates in Grade 7, and spent the proceeds on ice cream and comics. He was first published in a more conventional sense at the age of 18 and has since published eleven books including the Amazon.com Bestseller Alice in Deadland. Learn more about him and contact him at mainakdhar.com.
(This is a sponsored post.)