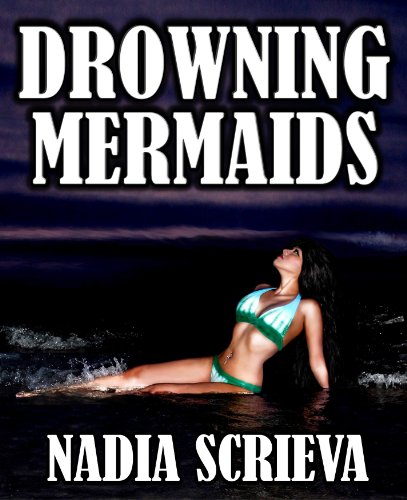 4.7 stars – 18 Reviews
Kindle Price: $2.99
Text-to-Speech and Lending: Enabled
Don’t have a Kindle? Get yours here.
*** We announced earlier this week that Nadia Scrieva, author of DROWNING MERMAIDS, is the sponsor of this week’s KINDLE FIRE Giveaway Sweepstakes. Please check out our Facebook page to enter. ***
Here’s the set-up:

Deep under Arctic waters lies an ice kingdom carved into a glacier. Those who dwell within it possess magnificent biological secrets. Due to the dangers of impending war, the Princess of Adlivun is forced to flee her undersea utopia and regroup with her sisters in Alaska.

Captain Trevain Murphy is a successful king crab fisherman who has spent his life building his empire above the sea, and knows nothing of the empire beneath it. When he meets a mysterious dancer whose father has recently died, he extends kindness towards her, unaware of her unique genetics and royal lineage.

Trevain’s attraction to the enigmatic Aazuria Vellamo will involve him in dangerous designs that will forever change his life, and his perspective on himself and his world. He embarks on perilous journeys in which he will need to release all of his insecurities and inhibitions in order to survive.

“This book is so mesmerizing! Certain scenes were so riveting that I could hardly bear to close my eyes. There were also really touching moments which almost made me cry… it is so poignant how much family members care for each other. It’s just as miserable and just as wonderful as real families. I felt like I was right there in the action, holding my breath and hoping everything would work out for the best.

The characters are so real, nuanced, and relatable. Arguments between them get so dramatic and intense that it hurts to read it. Princess Aazuria is very refined and formal, commanding respect, while the warrior Visola is aggressive, crazy, and totally lovable. Captain Trevain Murphy is someone you will admire and pity, love and hate, but he is someone you will understand above all.

The take on the mermaid myth is very interesting, and has a bit of a sci-fi spin on it. They are not magical creatures, they are human beings with genetic mutations who have lived separate from land societies for centuries. The differences between “them” and “us” and trying to determine whether they are human or not makes for an excellent vehicle for examining issues of identity. The mermaids have trouble defining themselves because of the complexity of their similarities and differences with the humans who live on land.

This was a fascinating, totally enthralling read, and I can’t wait for the next book in the series”

Nadia Scrieva was born in 1988 in Toronto, Canada. She studied English and Anthropology, graduating with an Honors B.A. from the University of Toronto in 2011. She was employed as a model for several years. Due to a deficient social life, Nadia spent her childhood reading and her preteen years writing fanfiction. After briefly experimenting with being a normal, productive member of society, she decided it wasn’t for her, and chose to return to literature. Nadia Scrieva firmly believes that if she were the owner of a punching bag, or if she could afford relatively frequent deep-tissue massages, the volume of her writing would sharply decrease. She writes best when she is tense, furious, or restless, and perhaps with slight inebriation.
(This is a sponsored post.)