Heads Up! You Have Until Sunday to Enter This Week’s Brand New KINDLE FIRE Giveaway Sweepstakes, Sponsored by James A. West, author of THE GOD KING (HEIRS OF THE FALLEN) – 4.4 Stars on Amazon and Now $2.99

If you are Richard Roon of Campbell River, BC, you did. Richard won his on Monday in last week’s Kindle Nation Daily KINDLE FIRE Giveaway Sweepstakes, and when it arrives at his home, he will become the 28th citizen of Kindle Nation to win a Kindle Fire from us in the past few months.

But we will be giving away dozens more Kindles this year, and we’d like for you to be one of the lucky winners! All you have to do to have a great chance to win is follow the extremely easy steps at the end of this post.

Like each one of our weekly sweepstakes, this week’s giveaway is sponsored by a talented author who we think will prove to be a favorite with our readers. James A. West, author of THE GOD KING (HEIRS OF THE FALLEN),  is springing for the Kindle Fire that could very well end up with your name on it, so it only makes sense to pay it forward and stimulate both your karma and your imagination at the same time by chancing $2.99 to grace your Kindle with a novel that has 4.4 stars on Amazon from discriminating readers like us.

“With a crackle of thunder, a nacreous veil flashed into existence over the large granite basin, casting the chamber in a cold dead light. Prince Varis Kilvar stifled a fearful shout as the rumbling peal faded, replaced by demonic howls that burst through the luminous shroud and soared into the murky heights of the ancient temple’s domed ceiling.”

From that amazing first sentence right through to a compelling finish, fans of the Eragon books, The Name of the Wind, The Sword of Truth series, or the Game of Thrones series will find a new source of great reading in our sponsor James A. West.

The God King (Heirs of the Fallen) 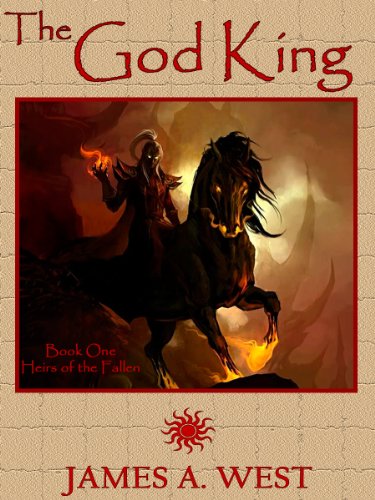 Heroes are not born, they are forged in the fires of apocalypse…

In the heavens above, the three moons crash together, streaming fire and death in their wake; below, the seas rage as the roiling face of the world shatters. After Prince Varis Kilvar steals powers to transform himself into a god, chaos reigns from the king’s city of Ammathor to the forbidding walls of the Black Keep. At his heels marches a demonic army torn from the very bowels of the Thousand Hells, and the risen God King uses terror to stake his claim over all lands.

Betrayed and bound to Varis by powers he does not understand, mercenary Kian Valara is forced to masquerade as the world’s savior, while a beautiful Sister of Najihar prepares him for his last battle. Victory against a living god is far from certain, but vengeance? For Kian, when the battle rage falls upon his soul and the sword hilt is hot and alive against his palm, vengeance is never out of reach.

The God King is approximately 120,000 words, and is specially formatted for Kindle with an active table of contents.

“Absolutely Fantastic! I was thrown right into the story by the vivid imagery. There is no waiting for character development. We get to know the characters from the heart racing action that starts at page one. I couldn’t put it down. I hope to read more from this author soon.” – Amazon Reviewer, 5 Stars

When James was thirteen years old he read The Talisman, by Stephen King and Peter Straub, and a seed of an idea was planted that someday he, too, would create different worlds and realities.

After a stint in the US Army, a year as a long-haul truck driver, and a couple as a log home builder, he enrolled at the University of Montana. There, he majored in Psychology and, by chance, took a creative writing course. Words started to flow, and worlds were born.

James lives in Montana with his wife and his bodyguard, a Mini-Schnauzer named Jonesy.