Today’s Kindle Daily Deal — Thursday, May 31 – Two Great Reads for under $3 — Save 43% on Allison Croggan’s First Book in Her Pellinor Series, THE NAMING, plus … Don’t miss Lawrence Kelter’s KISS OF THE DEVIL’S BREATH (Today’s Sponsor) 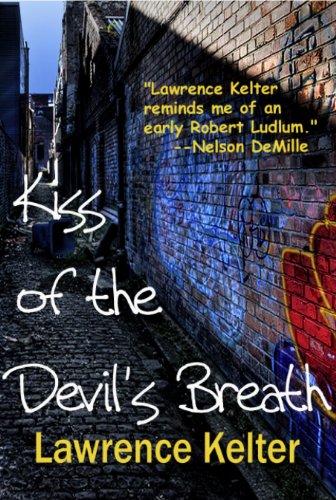 by Lawrence Kelter
4.1 stars – 15 Reviews
Kindle Price: 99 cents
Text-to-Speech and Lending: Enabled
Don’t have a Kindle? Get yours here.

Here’s the scoop. Once there was Marlow, now there’s Mango, Frank Mango, a new detective doing his job in a very old fashioned way, an unlikely hero in an age of computers, gadgets, and gizmos. Two dead bodies have been discarded along the Sunset Strip, both aspiring actors, women of talent and ambition in a town renown for eating you up and spitting you out.

Who really cares about these nobodies? Mums the word—with the Academy Awards just days off, the powers that be are determined to sweep the dead under the red carpet, at least until Oscar can take his gratuitous bow. There are, however, wrinkles in this finely crafted plan of deception, most notably the disappearance of yet another woman, a killer whose sniper rifle is trained on the fabled red carpet, and a throwback detective who doesn’t like to get pushed around.

“Lawrence Kelter is an exciting new novelist, who reminds me of an early Robert Ludlum.”
–Nelson DeMille

“This is what they mean by pulp fiction.”–Simon Wood, author of TERMINATED

“Several young aspiring starlets are murdered in Hollywood, California, possibly at the bidding of one of Tinsel Town’s heavy hitters. When Frank Mango is hired to find a woman’s missing sister, he fears she might fall prey to the Sunset Killer. Reading like a highly suspenseful combination of hardboiled prose and standup comedy, Kiss of the Devil’s Breath will keep you guessing and laughing. Readers will want to get to know Frank Mango, the fat, funny private eye with the fruity name.” –Debbi Mack, New York Times bestselling author of the Sam McRae mystery series

..
Lawrence Kelter, author of the fine Stephanie Chalice mystery series, has just released “Kiss of the Devil’s Breath”, his first book featuring Hollywood PI Frank Mango. I found Mango to be a compelling protagonist and narrator: part anachronistic Mike Hammer, part Nelson DeMille’s wise-cracking John Corey, and part Ed McBain’s willfully obnoxious Fat Ollie Weeks. “Kiss of the Devil’s Breath” takes on the immoral underbelly of Tinseltown. The humor can be laugh-out-loud funny. The mystery itself seemed poised for a pretty standard solution, but just when I thought everything was resolved there was one final twist. A great bargain at 99 cents. -Must Read Mysteries