Enter A Sun-Scorched Realm Littered With The Relics of Mankind’s Destruction & Stay One Step Ahead of Demonic Slavemasters in Today’s Bargain Book Alert – James A. West’s CROWN OF THE SETTING SUN (HEIRS OF THE FALLEN) – Now Just 99 Cents on Kindle

Crown of the Setting Sun (Heirs of the Fallen) 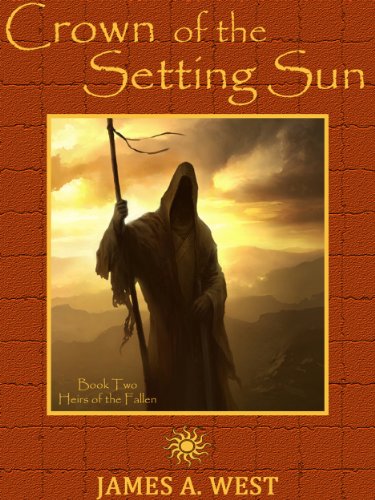 Chains that bind the soul are stronger than iron…

One step ahead of demonic slavemasters, Leitos flees across a sun-scorched realm littered with the relics of mankind’s destruction. No matter which way he turns, enemies stalk the shadows clad in fiendish flesh, or hunt in plain sight wearing the faces of men.

Thrust into a world his slave’s eyes have never seen, Leitos struggles to heed his dying grandfather’s command: “Run and hide. Find the Crown of the Setting Sun beyond the Mountains of Fire, and there seek out the Brothers of the Crimson Shield.” Such are the words of a madman … yet they are his only hope.

Author page of anti-fantasy epic fantasy writer James A. West! If you like leaner, fast-paced anti-fantasy, you’ve come to the right place. What is anti-fantasy you ask? It’s the new fantasy! Shorter stand-alone books that go somewhere, no elves, dwarves, or dragons, and definitely no heroes or orphaned farm boys that save the day at the last minute.

When James was thirteen years old he read The Talisman, by Stephen King and Peter Straub, and a seed of an idea was planted that someday he, too, would create different worlds and realities.

After a stint in the US Army, a year as a long-haul truck driver, and a couple as a log home builder, he enrolled at the University of Montana. There, he majored in Psychology and, by chance, took a creative writing course. Words started to flow, and worlds were born.

James lives in Montana with his wife and his bodyguard, a Mini-Schnauzer named Jonesy.