Romance Suspense Alert! Alexa Grace’s DEADLY DECEPTION (DEADLY TRILOGY) Is A Fast-Paced Thriller Romance And Readers Are Raving About The HOT Scenes! Enjoy With Your AC On! — 5.0 Stars With All Rave Reviews & Now Just $2.99 or FREE via Kindle Lending Library 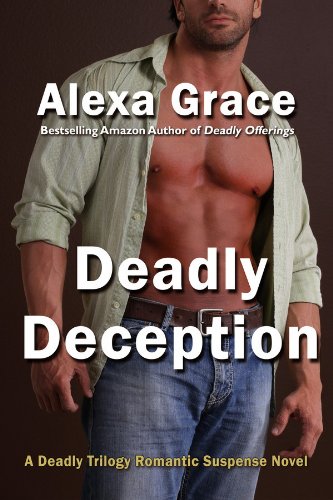 Lane Hansen has a problem. He needs a woman to portray his wife in an undercover operation and the only females on his team are either very pregnant or built like linebackers. Then he remembers gorgeous P.I. Frankie Douglas — a woman who could take his breath away by her beauty and take him down in 2.5 seconds. Unfortunately, she’s the same woman he treated like a one night stand six months before.

Frankie Douglas has a problem. She wants to rid the world of one baby trafficking killer. The only way to do that is to partner with Lane Hanson, the man who hurt her by disappearing from her life after a night of mind-blowing sex.

They’ve been warned! Getting personally involved with a partner can put cases and lives at risk. Going undercover as husband and wife, Lane and Frankie struggle to keep their relationship strictly professional as their sizzling passion threatens to burn out of control.

Reviews
“Deadly Deception is a fast paced thriller romance mystery. Does that make sense? There is action, adventure and some HOT HOT scenes. Ms. Grace has written a great 2nd installment to her Deadly Trilogy. The romance is very believable with past issues between Lane and Frankie. Frankie is not easily forgiving Lane his past transgressions. Lane being torn because he knew he made the biggest mistake ever. Deadly Deception is a perfectly woven tale that will keep you on the edge of your seat the entire book.” – Forget the Housework, I’m Reading Blog
“Another great read from Alexa Grace!! She is fast becoming one of my favorite authors!!! Could not put this book down! Amazing original storyline and I just love the characters Frankie and Lane! This book has the perfect mix of suspense, romance and humor! One of the scenes had me laughing so hard I had tears in my eyes! Cannot wait until the 3rd book of the Deadly trilogy!” – Amazon Reviewer, 5 Stars
About The Author

Alexa’s journey started in March 2011 when the Sr. Director of Training & Development position she’d held for thirteen years was eliminated. A door closed but another one opened. She finally had the time to pursue her dream of writing books — her dream since childhood. Her focus is now on writing riveting romantic suspense novels.

Alexa earned two degrees from Indiana State University and currently lives in Florida with her daughter. She’s a member of Romance Writers of America (national) as well as the Florida Chapter. Her first book DEADLY OFFERINGS has consistently been on Amazon’s Top 100 Bestselling Romantic Suspense Books. She was recently named one of the top 100 Indie authors by Kindle Review.

Her writing support team includes five Miniature Schnauzers, three of which are rescues. As a writer, she is fueled by Starbucks lattes, chocolate and emails from readers.

Her book DEADLY OFFERINGS is the first of her Deadly Trilogy. Alexa’s new book DEADLY DECEPTION is now available on Amazon. DEADLY RELATIONS will be launched in the Fall 2012.