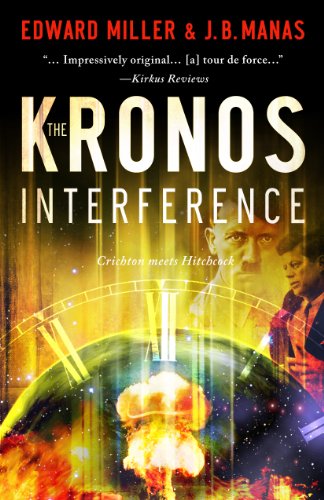 5.0 stars – 21 Reviews
Kindle Price: $2.99
Text-to-Speech and Lending: Enabled
Don’t have a Kindle? Get yours here.
Here’s the set-up:
How far would you go to save the world? When physicist Jacob Newman is pulled from his family, his job, and his whole life to investigate a strange vessel discovered at the bottom of the South Pacific, he finds evidence of time travel, along with implications that a judgment day against mankind is imminent. But it isn’t until he cracks the time travel technology and uncovers a startling link to his own family history that he undertakes a dangerous mission back to 1924 to kill Adolf Hitler and undo a horrific episode of Earth’s violent past. The results are catastrophic, and soon he discovers much darker forces working against him–forces he must overcome if he hopes to save humanity and see his family again. Written in the vein of the late Michael Crichton, James Rollins, and similar authors who inject high concept plots with little-known historical facts and a touch of cutting-edge science, The Kronos Interference offers international intrigue, fast-paced action, and plenty of twists and turns. This new addition to the alternate history/technothriller genre received the coveted starred review from Kirkus Reviews, who called it “impressively original” and a “tour de force.”
Reviews
“In this time-travel thriller, debut authors Miller and Manas spin a clever, original variation on a classic alternative history premise… The prose is unfussy, the pacing appropriately brisk, and the past and future sequences show the authors’ admirable imaginative gifts… impressively original.” — Kirkus Reviews (starred review)
“An utterly delightful and super-stunning thriller, this novel had me page-racing with its excitement and intrigue. Science fiction, futuristic, historical, time-travel, extraterrestrial-this book has everything! I literally could not pause in the reading until I was finished, and I read with eyes wide and heart in throat… I highly recommend this to readers of thrillers, mysteries, metaphysics, history (especially World War II and pre-WWII Germany), and to all those who enjoy Dan Brown’s novels-just try this and you will be startled, amazed, and intrigued. If I could I would grant “The Kronos Interference” about 27 stars! Rest assured, this is a keeper and a rereader.” — Mallory Heart Reviews
“With The Kronos Interference, Miller and Manas have produced a high-concept thriller that will keep you on the edge of your seat. Through twists and turns galore, the authors take you on a wild ride that is physically and emotionally dangerous, morally challenging, and visually stunning.” — Paula Berinstein, The Writing Show Podcast
About The Authors
Edward Miller: As chief editor for a sci-fi gaming website for over fifteen years, Edward Miller has crafted hundreds of stories designed to take readers to new places and immerse them in mind-bending situations. In a former life as a musician, Edward toured the United States with such acts as Foghat, The Allman Brothers Band, Edgar Winter, 38 Special, and others. Edward resides in Willow Grove, Pennsylvania with his wife and family, along with their dog, Lady. J. B. Manas: J. B. Manas is a Philadelphia native whose world travels and passion for science, history, and the arts have led some to call him the consummate Renaissance Man. He’s an avid movie buff, a wine collector, a songwriter and guitarist, a technology geek, and an armchair philosopher–all of which make their way into his writing at one time or another. A senior editor by day and a leading expert on organizational ethics and lessons from history, his bestselling non-fiction works have received critical acclaim for being extensively researched, yet entertaining and accessible.