Looking For A Good Spy Thriller? Kindle Nation Daily Brand New Thriller of The Week Comes From Michael Patrick Clark’s The Folks At Fifty-Eight … A Delicious Spy Novel, Bold And Graphic – Be Prepared For Seduction, Betrayal, Blackmail, And Murder – The Right Ingredients For The Perfect Thriller!

Then you’ll love our magical Kindle book search tools that will help you find these great bargains in the thriller, mystery, and suspense categories: over 200 free titles, over 600 quality 99-centers, and thousands more that you can read for free through the Kindle Lending Library if you have Amazon Prime!

PLEASE NOTE: Occasionally a title will continue to appear on these lists for a short time after its price changes on Kindle. ALWAYS check the price on Amazon before making a purchase, please! If a book is free, you should see the following: Kindle Price: $0.00

The Folks at Fifty-Eight 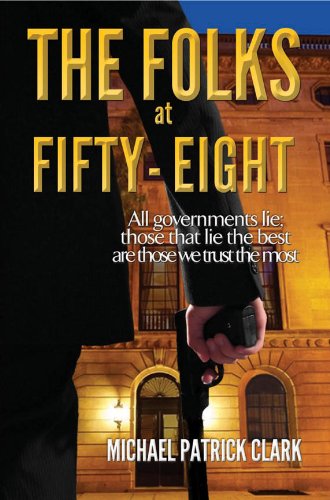 4.4 stars – 17 Reviews
Kindle Price: $3.83
Or currently FREE for Amazon Prime Members Via the Kindle Lending Library
Text-to-Speech and Lending: Enabled
Don’t have a Kindle? Get yours here.
Here’s the set-up:

Gerald Hammond is the exception to the rule; an honourable spy, whose lofty principles have brought him nothing but loneliness and isolation. Catherine Schmidt is the stunning young daughter of an assassinated spymaster, whose murderous quest for vengeance has left her at the mercy of the infamous Head of Soviet State Security.

On a covert operation, in Soviet-occupied Germany, Hammond has no knowledge of the unseen forces that sponsor and oppose his mission. He only knows that he must somehow save her to save himself, but, as ever-more disturbing revelations come to light, begins to wonder which poses the greater threat; the enemy he runs from, or the friend he runs to?

Set against a factual background of government conspiracy, and one of the most audacious espionage coups in history, the Folks at Fifty-Eight is a beautifully-paced tale of seduction, betrayal, blackmail, and murder that blurs the boundaries between fact and fiction.

“How could it get any better?” – Amazon Reviewer

“I purchased this based on the reviews, and it exceeded expectations” – Amazon Reviewer

Welcome to Kindle Nation’s magical and revolutionary Free Book Search Tool — automatically updated and refreshed in real time, now with Category Search! Use the drop-down menu (in red caps next to the menu bar near the top of the page) to search for free Kindle books by genre or category, then sort the list just the way you want it — by date added, bestselling, or review rating! But there’s no need to sort by price — because they’re all free!