It was an interesting week for anyone watching the dueling public statements of Amazon and Apple. And even more so for anyone trying to decide which tablet to buy this Fall, either for one’s own use or as a holiday gift. 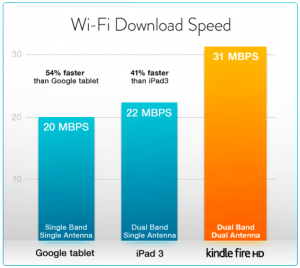 I have to admit that I was stunned by Apple’s big event the other day when it seemed like they were announcing updates of just about every product they have ever released: iMacs, MacBooks, all kinds of tablets, and more. It was certainly a testament to the company’s relentless innovation and to the number of times its spokespeople could use superlatives like “amazing” and “incredible” in the course of an hour. Anyone who doubted that Apple could keep turning out magical and revolutionary products under Tim Cook was proven wrong.

But Apple made some huge blunders in terms of product marketing, pricing array, and — most importantly — attention to building a relationship of trust with its most loyal customers. It was nice that Apple launched a new iPad with an A6X  chip, but what about the millions of people who bought the last-generation iPad, launched with an A5X just six months ago? It’s nice that Apple launched a $329 iPad Mini to compete with the Kindle HD 7 and the Nexus 7, but Apple execs have to be smoking some funny stuff if they expect to compete with a price that is 65% higher. Maybe Apple customers’ product loyalty is so great that they can pull it off, but it says here that Apple hubris has just opened the door for the Kindle Fire and other Android-based tablets to take a majority market share in the tablet market by the time the 2013 holiday buying season is under way. Kindle Fire HD sales via our Kindle Nation websites were already brisk over the past six weeks, but since Apple announced that its competing Mini-Pad would be priced at $329 we have seen those sales double.

I suspect Amazon execs were a bit shocked themselves by the combination of Mini-Pad’s price and such poor screen resolution that one would not be far off to call the iPad Mini a “smaller, fuzzier” version of the iPad. So I am willing to accept that as an excuse for the fairly clumsy insertion of a bullet-by-bullet comparison between the new iPads and the Kindle Fire HD models in Amazon’s earnings press release Thursday. It was a little clumsy. But it also summed things up quite well:

When you take another look at the relative prices and consider the widespread concern that the new iPads may have significant holiday shipping delays, one has to wonder if these magical and revolutionary new products might not be the beginning of the end of Apple’s dominance in the tablet market.