Well, let’s see…. It’s time to begin a brand new Kindle Fire giveaway sweepstakes – http://bit.ly/KND-FIREHD-SWEEPS-11-4-2012– and while we’re at it, we have good news for Clio Smith of Hollywood, FL! Clio is the winner of last week’s sweepstakes, which closed at midnight last night! We’ll be shipping her Kindle Fire HD as soon as we receive her shipping address confirmation!
And here’s a link for our brand new sweepstakes, which runs until midnight Nov. 4 – http://bit.ly/KND-FIREHD-SWEEPS-11-4-2012 … and of course, good luck to ALL!

, but with an urban fantasy setting and geared toward mature readers (age 16 and older). 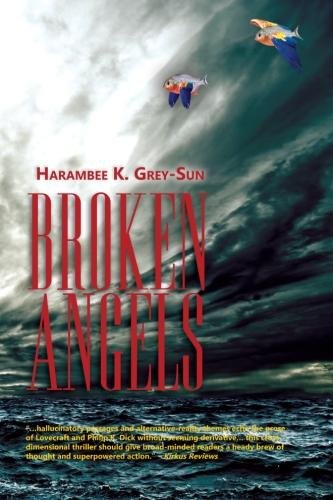 Kindle Price: $2.99
Text-to-Speech and Lending: Enabled
Here’s the set-up:
Still grieving years after the butchery of his pregnant mother and kidnapping of his premature brother, Robert Goldner was just seventeen when he contracted the White Fire Virus. He prayed for the excruciating death most victims experience shortly after acquiring the STD. Instead he was cursed to live on, slowly dying, ridden with billions of parasites, and possessing a bizarre but limited ability to manipulate photons, the basic units of light.At age twenty, Robert still considers himself damned and confused, not the least because more and more surviving virus-carriers are calling themselves “angels”– God-blessed beings of light–his licentious partner Darryl Ridley being a prime example. But Robert attempts to shove the irritating mystery of it all to the gutters of his mind as he focuses on his mission as a Watcher agent, locating and recovering missing children in the Washington, D.C. area.When Robert and Darryl receive a hot tip on the location of a virus-infected girl who disappeared shortly after attempting to massacre half her high school, they prepare to chalk up another success. But when they instead find the girl’s best friend from school, beaten nearly to death, they become entwined in a conspiracy involving magick, bizarre creatures, fantastic realms beyond space and time, and even the death of God.Can two dying angels do anything to prevent the Apocalypse?
Each week’s Kindle Fire HD giveaway sweepstakes is sponsored by one paid title. We encourage you to support our sponsors and thank you for considering them.
App loading…