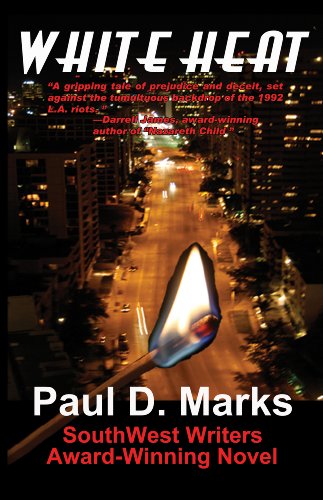 5 stars: Explosive, Visual, Dynamite and Totally Noir
Kindle Price: $2.99
Or currently FREE for Amazon Prime Members Via the Kindle Lending Library
Text-to-Speech and Lending: Enabled
Don’t have a Kindle? Get yours here.

P.I. Duke Rogers finds himself in a highly combustible situation when he takes a weaselly white client’s $250 to locate a black man who’s “an old friend.” But his case might have to wait. The immediate problem: getting out of South Central LA in one piece during the 1992 “Rodney King” riots … that’s just the beginning of his problems.

WARNING: WHITE HEAT is NOT for the easily intimidated!  It depicts realistic violence, racism, adult situations and contains offensive language, Don’t read this book if you can’t handle it.

White Heat…explodes on the page.

Days before the verdict is read in the Rodney King Case in Los Angeles back in the 1992, a weasely little man walks into private detective Duke Rogers office and asks him to locate an old friend, Teddie Matson. The guy is white and Teddie is black, and Los Angeles is just about ready to explode due to racial tensions, but Duke isn’t thinking about that, just the $250 he’ll make on the easy case.

A few days later Teddie Matson is murdered and Duke’s guilt meter is through the roof. Turns out Teddie was a well-known TV actress with her own show. This doesn’t make checking into her death any easier.

But there are a lot more reasons hunting down her killer is going to be a lot more difficult. First, the verdict is in on the Rodney King Case and Los Angeles is going up in flames. The area hardest hit is right where Teddie’s family lives. And Duke, being a white man, isn’t wanted in South Central L.A.
–G.B. Pool

5 stars:  Hang on tight for a white knuckle read!

Paul D. Marks’ debut novel “White Heat” couldn’t be better titled, since it burns like a phosphorous bomb, illuminating the mean streets of Los Angeles at a time when they were at their meanest, rawest and most incendiary: during the 1992 riots that tore the city apart after the Rodney King beating verdict… What may be even more remarkable than Marks’ evocation of one of LA’s most challenging moments is his creation of that rarest of avises, a wholly original P.I. protagonist, in the form of Marion “Duke” Rogers, a former Navy SEAL who struggles to maintain his honor despite a near-crippling guilt complex. If that weren’t enough, the author manages to propel his flawed hero into his dangerous, duty-bound quest through one of the most ingenious motives I can remember reading. “White Heat” is a tough, tersely-written book featuring tough, complicated, and not always lovable characters who might push many readers to the very edge of their comfort zone. But it’s honest and it’s real, and doesn’t it doesn’t pander to its audience by providing pat or phony answers to the many complex issues it raises.
–M2

5 stars: FRAUGHT WITH DETAIL AND EMOTION

WHITE HEAT … is in a word, ‘Intense’. This is a well-written book that’s gripping, captivating and brings back memories of a bad time in L.A.
–True Crime Author RJ Parker

WHITE HEAT is a skillfully woven story centered around the period of the Rodney King riots of 1992 and that very emotional period of racial unrest. Living in Los Angeles in 1992 reading this fact influenced novel brought back deeply regressed feelings I have not felt for twenty years. Even after the who-done-it is solved, the novel leaves you with the question that is still valid today, why can’t we all just get along?
–Riverguy

P.I. Duke Rogers finds himself in a combustible situation in this racially charged thriller. His case might have to wait… The immediate problem: getting out of South Central Los Angeles in one piece during the 1992 “Rodney King” riots and that’s just the beginning of his problems.

While Duke tracks down the killer he must also deal with the racism of his partner, Jack, and from Warren, the murder victim’s brother. He must also confront his own possible latent racism – even as he’s in an interracial relationship with the dead woman’s sister.

And here, in the comfort of your own browser, is a free sample excerpt of WHITE HEAT by Paul D. Marks: