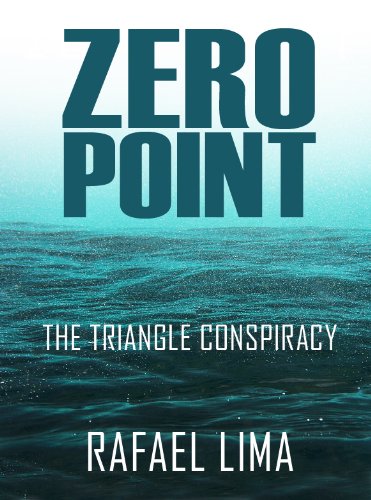 4.7 stars – 9 Reviews
Kindle Price: $2.99
Or currently FREE for Amazon Prime Members Via the Kindle Lending Library
Text-to-Speech and Lending: Enabled
Don’t have a Kindle? Get yours here.
Here’s the set-up:

A ghost ship reportedly sunk in 1948 mysteriously appears out of a yellow fog. Days later the 60-year-old life raft is found in new condition, with no survivors.The last radio messages from flight 19 filters through a ship’s radio six decades after the pilots disappeared.

Drawn by these mysteries, Samantha Weiss, a beautiful but icy Marine archaeologist, enlists renowned Bermuda Triangle authority Robert Medina — together they discover a series of clues drawing them into uncharted depths at the edge of a secret Navy base.

Set in the emerald waters of the Bahamas, Zero Point  discards all the existing theories of the triangle, blending fact and fiction to come up with a theory and a story that may or may not be fiction.

Read Zero Point: The Triangle Conspiracy — because if you disappear in the triangle, the only thing left are questions.

Exciting!
“An original and exciting ride …offers thought- provoking explanations about what could be the real truth behind the baffling mysteries of the Bermuda Triangle….fast-paced and fun, and the wonderfully vivid descriptions of the beautiful shores and aquamarine waters of the Bahamas truly helps to “place” you right there in the action.”

The love story and the mystery will keep you turning pages!
“…much more interesting and mind-blowing than all the Bermuda Triangle theories before! This is one of the most exciting novels I’ve read. The characters are complicated and dimensional and the love story flows through the length of the story…”

Gripping, emotionally satisfying, masterfully constructed
“…the author has done his research and applied real life history and technology to the story to give it a fresh new approach on the old tried and true conspiracy theory fiction novel….filled with characters that are as unforgettable as they are emotionally complex. Zero Point is gripping from Page 1 and ever unpredictable.”

Based on his experience as a stringer reporter for CNN, Rafael Lima’s first full length play, El Salvador, was developed and staged at the Circle Repertory Theater in New York and published by Samuel French and Applause books. After an extended run in New York City to rave reviews El Salvador was translated, published and produced internationally in seven languages and went on to productions at the prestigious Steppenwolf theatre as well as the New Theatre in Los Angeles where the play garnished Lima the L.A. Drama Critic’s Circle award, a Dramalogue Award as well as a Rockefeller Grant for excellence in dramatic writing.

Five more of Mr. Lima’s plays were produced at the prestigious Circle Repertory Theatre in New York City and were later produced in theatres across the country.

After a successful career as a playwright Lima moved to Los Angeles were he wrote feature screenplays for Paramount, Disney, Castle Rock and Desi-Lu productions. Mr. Lima has also written for several T.V. series including China Beach, Wiseguy, Teleplay Pilots for Fox, Spelling Entertainment, Warner Brothers, HBO, ABC, and was the original writer of the Andy Garcia/HBO produced TV movie “For God and Country.”

Additionally Rafael Lima has written numerous documentary projects for PBS and the Discovery Channel as well as writing feature articles for national publications.