All Governments Lie; Those That Lie The Best Are Those We Trust The Most – Michael Patrick Clark’s The Folks at Fifty-Eight **PLUS Enter This Week’s Kindle Fire HD Giveaway Sweepstakes

The Folks at Fifty-Eight 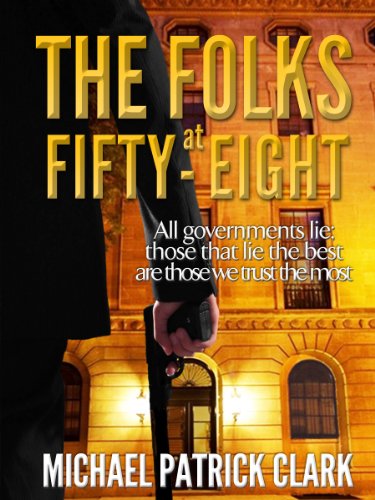 4.3 stars – 24 Reviews
Kindle Price: $3.99
Text-to-Speech and Lending: Enabled
*** Author Michael Patrick Clark is this week’s Kindle Fire HD giveaway sweepstakes sponsor. To enter your name into this week’s sweepstakes click here!
Here’s the set-up:
Gerald Hammond is the exception to the rule; an honourable spy, whose lofty principles have brought him nothing but loneliness and isolation. Catherine Schmidt is the stunning young daughter of an assassinated spymaster, whose murderous quest for vengeance has left her at the mercy of the infamous Head of Soviet State Security.
On a covert operation, in Soviet-occupied Germany, Hammond has no knowledge of the unseen forces that sponsor and oppose his mission. He only knows that he must somehow save her to save himself, but, as ever-more disturbing revelations come to light, begins to wonder which poses the greater threat; the enemy he runs from, or the friend he runs to?

Set against a factual background of government conspiracy, and one of the most audacious espionage coups in history, the Folks at Fifty-Eight is a beautifully-paced tale of seduction, betrayal, blackmail, and murder that blurs the boundaries between fact and fiction.

“How could it get any better?” – Amazon Reviewer

“I purchased this based on the reviews, and it exceeded expectations” – Amazon Reviewer

Michael Patrick Clark, author of The Folks at Fifty-Eight and Flying with Cuckoos, was born on The Fourth of July 1950 in London, England.
He spent the first few years of his life in an orphanage, before adoption brought a new life.
Michael joined the armed forces as a boy apprentice, and over the ensuing years he travelled the world. In the late seventies Michael moved into the high-tech industry. After twenty-five years, made the life-changing decision to move to Spain, and write novels.
If you’d like to get in touch with Mike visit his website at http://www.michaelpatrickclark.com/ add him on Twitter: @mpclark77 / add him on Facebook: MichaelPatrickClark.