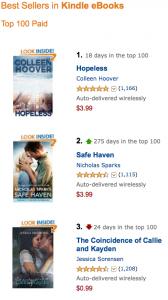 eBook Prices: Don’t Miss the Forest for the Tease. We’re overdue for one of our periodic analyses of ebook pricing, but we did notice that Laura Hazard Owen, a pretty smart web journalist, published an interesting piece a couple of weeks ago in which she observed that ebook prices were not too high before (during the 2010-2012 heyday of agency-model price fixing when five defendant big publishers conspired with Apple to raise most new-release ebook prices by 30 to 50%), and thus are not dropping significantly now (that the courts have sentenced the agency model to a slow death). If one focuses primarily on the pricing of blockbuster new-release bestsellers from those big publishers, the data might seem to support Laura’s argument, but what a lot of observers miss is the way Amazon is changing the game with the pricing of titles that other ebook retailers don’t even have. It’s not just the growing power of the various Amazon imprints, there are also over a quarter of a million Kindle-exclusive KDP Select titles. As a result of Amazon’s and authors’ power over pricing of these titles, they drive ebook consumers’ pricing expectations so that there end up being two markets:

What Kindle Nation readers have told us loud and clear over the past few years is that they are more and more likely to check out “everything else” except in the increasingly rare cases where they simply must spend more for the latest from [insert your favorite blockbuster author’s name here].

Does the data prove this anecdotal self-reporting? Yes, big time. As of this morning, Saturday, January 5, 9 of the top 10 bestselling books in the Kindle Store

were priced under $6, representing a combination of indie authors, Amazon imprints, and big pub titles buying into Amazon’s aggressive pricing.

Full disclosure: We have an axe to grind where ebook pricing is concerned. We want to see quality authors and smart publishers make money, and we want to see Kindle Nation treated fairly, and we continue to believe that the sweet spot of fair common ground involves pricing ebooks between 99 cents and $9.99, based on a relatively complex set of factors. For the vast majority of emerging authors of fiction, we think $2.99 hits that sweet spot, and that’s what we tell our own sponsors whenever they ask. (At $2.99, an individual author will make about $2.05, a higher per-unit royalty than she would have earned for each paperback copy sold under a traditional publishing contract.)

Tallying Up Your Yearly Amazon Expenditures. Now that 2012 is sooooo last week, would you like to know how much you spent with Amazon during the year just ended? It may be news you can use, whether because some of it may be tax-deductible, because knowing the awful truth may help you budget wisely in the new year, or because you and me and Nate Silver just love data, regardless of whether that data amounts to The Signal [or] The Noise. You can make a good beginning toward having this data in hand by going here

to download a record of (almost) all your Amazon purchases for any historic period. My pet peeve: why can’t Amazon include Kindle content purchases in these downloadable spreadsheets?

Amazon Mobile Sales. Now that you know how much you spent with Amazon last year, it may be interesting to know how much of that total you purchased using a mobile device like a Kindle Fire, iPad, smartphone, etc? One Wall Street analyst estimated this week that somewhere in the ballpark of 8% of Amazon’s revenues are now transacted via some kind of mobile device. That may not sound like much, until you consider that that $5 billion or so would dwarf the revenues of millions of nearly all retailers and some smaller nations. With shopping apps on just about every mobile communications device extant, Amazon is delivering on its commitment to turn its various Kindles (and everything else) into delivery systems not only for digital content but for everything else we would ever want to buy. And we suspect that that 8% estimate is very conservative now, and miniscule in comparison to where it will be in a year, because there’s no major corporation in the history of the world that understands instant gratification quite so well as the outfit that Jeff Bezos started in his garage 18 years ago.

NookFail. We’ve said before that a tablet like the Nook Color is a perfectly lovely hardware device, but is destined to fail because of the company that brought it to market. In the case of the Nook, I personally can’t get past the combination of Barnes & Noble’s atrocious, deceitful, scammy and spammy customer support, but even if I could, I just don’t understand why anyone would by an ebook reader — and spend folding money on ebook content — from a company that is hemorrhaging money and destined to follow Borders into bankruptcy. According to its own January 3 press release, B&N booked losses everywhere from same-store sales to Nook sales, and now projects that the Nook will be as big a financial failure in 2013 as it was in 2012 despite its statement that it “has made significant investments over the past three years building the valuable NOOK digital retailing platform, which has resulted in millions of digital customers buying content from Barnes & Noble.” Millions of digital customers who may end up feeling just a bit cheated if the company isn’t around to support that content by mid-decade. I’m just saying.