And for the next week all of these great reading choices are brought to you by our brand new Thriller of the Week, David Greene’s Detonate (Tyrone King). Please check it out! 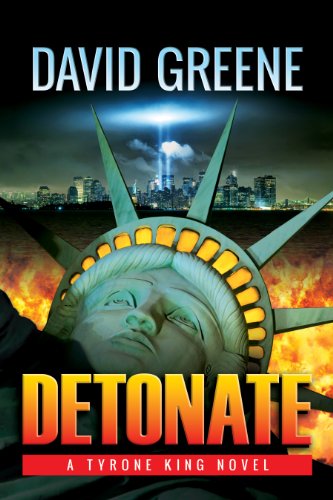 4.0 stars – 2 Reviews
Kindle Price: $1.99
Or currently FREE for Amazon Prime Members Via the Kindle Lending Library
Text-to-Speech and Lending: Enabled
Don’t have a Kindle? Get yours here.
Here’s the set-up:

The FBI hunts private investigator Tyrone King after he’s implicated in a plot to blow up a train on the border between Canada and the United States. Hoping to prove his innocence, King chases the real terrorists from Niagara Falls to New York City with the help of Sarah, a passenger on the train.

King goes undercover to try to stop the next bombing. But after he gets to know one of the terrorists, he realizes he wants to save him.

As the FBI, King, Sarah, and the terrorists all converge in New York City, the fate of the Statue of Liberty hangs in the balance.

One Reviewer Notes
“What a fun read this is–fast as the train that races across the countryside on its way to NYC; engaging characters; and a story that’s witty and wise and timely. Buy this book and enjoy yourself!” – Amazon Reviewer, 5 Stars
About The Author

David Greene’s creative life has evolved from film to photography to writing. He wrote and directed the film, Pamela and Ian, in which the characters grapple with the fact that they are shadows of light and that the film must end.

David began writing fiction after being guided into a hypnotic trance by a researcher documenting past life memories. David’s memories from that past-life regression session were the genesis for his first novel, Unmentionables, about slaves who lived and loved during the Civil War era.

David’s most recent novel, the thriller Detonate, an homage to Hitchcock, employs a classic “wrong man” plot. Detonate is the first of a series of novels featuring private investigator Tyrone King who is half white, half black, half straight, half gay. He’s a hero who seeks to get the bad guys without using guns or violence.

David is the spouse of painter James Stephens. They live in Chicago.