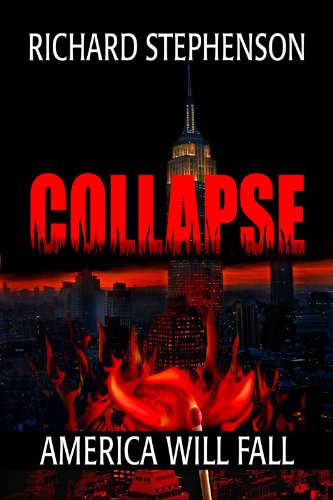 BOOK ONE in the NEW AMERICA series.

America is falling, ready to join the Roman Empire as a distant memory in the annals of history. The year is 2027. Tired and desperate, the American people are deep in the middle of The Second Great Depression. The Florida coastline is in ruins from the most powerful hurricane on record; a second just like it is bearing down on the state of Texas. For the first time in history, the Middle East has united as one and amassed the most formidable army the world has seen since the Third Reich. A hidden army of terrorists is on American soil. This is the story of three men: Howard Beck, the world’s richest man, also diagnosed with Asperger’s Syndrome. Richard Dupree, ex-Navy SEAL turned escaped convict. Maxwell Harris, a crippled, burned out Chief of Police of a small Texas town. At first they must fight for their own survival against impossible odds. Finally, the three men must band together to save their beloved country from collapse.

BOOK TWO in the New America series, entitled “Resistance” is slated for a summer 2013 release.

“I’ve read a lot of best sellers in my day and this book is better than most of them! A real page-turner, I couldn’t put it down. Very impressed with how the story flows so seamlessly and the characters are so real to me. Can’t wait for the sequel!” – Amazon Reviewer, 5 Stars
About The Author
Richard Stephenson was born in 1975 in Denison, TX and spent his childhood in North Texas. In 1992, he graduated high school after only three years. He then pursued his degree at Oklahoma Christian University, once again accomplishing the task in three years. Richard then married his best friend before going off to basic training to be a military policeman with the US Army. With his new wife joining the adventure, they spent the next four years at Fort Polk, LA and had two children.

Just before his son turned five, Richard and his wife were told that their oldest child had Asperger’s Syndrome. Nine years later, Richard’s son would become the inspiration for the character of Howard Beck.

After leaving the armed forces, Richard continued his law enforcement career in the federal sector and has been with the Department of Justice for eleven years.

Richard enjoys many things. He reads constantly with the thanks of his trusty iPad. When he can find the time, he can be found playing Mass Effect, Fallout: New Vegas, or Modern Warfare 2. When a friend or a friend of friend needs a computer fixed, Richard is on the case.

Richard has always had a passion for writing. His first novel, Collapse, will be released this summer.