In The Midst Of Wolves 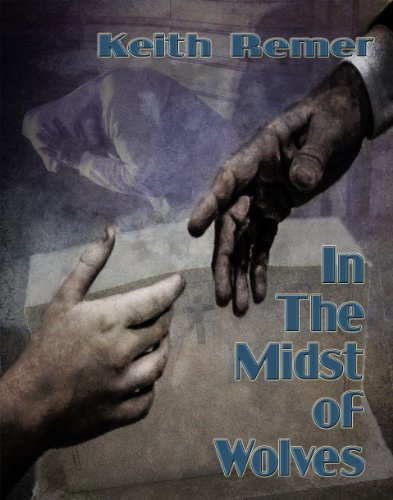 5.0 stars – 12 Reviews
Kindle Price: $9.99
Text-to-Speech and Lending: Enabled
Don’t have a Kindle? Get yours here.
Here’s the set-up:
David Robbins has it all – a loving wife, two great children, a thriving business, and a stunning home in the nicest neighborhood in quiet Shawnee, Oklahoma. He is a pillar of his community and an elder of the local Presbyterian Church. But his life quickly unravels when a seemingly deranged drifter takes the parishioners of Robbins’ church hostage. The consequences are catastrophic. Because of Robbins’ actions during the ordeal, an ambitious assistant district attorney files charges on Robbins that can potentially put him in prison for the rest of his life. Robbins’ troubles grow exponentially when his wife files for divorce, his business collapses, and he is treated with contempt by the community – especially by the members of his church. Meanwhile, the tormented perpetrator of the horrendous crime committed on the parishioners is on the run. Despite its tragic beginnings and less than perfect outcome, In The Midst Of Wolves, ultimately is the story of faith, forgiveness, redemption, and eventually one of justice.
5-Star Amazon Review
“Keith Remer is once again, amazing! This book had me obsessed with reading it and finding out what happened in the end, the end was great but after reading with a fury to get to the ending, I was sorry it was over. Having retired from a prosecutor’s office I could relate to a lot of the details and they were right on. Thanks Keith for another great book, keep up the good work! Can’t wait for the next one!”
About The Author

International award winning author Keith Remer is a native Oklahoman. As such, he realized long ago there are no better breeding grounds for thrillers than the trailer parks, oilfields, churches, ranches, skyscrapers and meth-labs of the Bible-Belt. Remer fills his fictionalized accounts with the products of the region’s western, Native American, outlaw, and fundamental Christian cultures to produce unforgettable characters who bring his unique plots to life.

Keith is a retired army colonel. He spends his retirement as a small-time rancher and adjunct college professor. In the late 70’s and early 80’s he took a ten-year break from the army to serve as an Oklahoma City police officer. During those years he policed the roughest precincts of the city. Remer’s specialized military training awarded him opportunities to join the S.W.A.T. team and bomb squad.

Keith was raised as the son of an oilfield roustabout. He spent his formative years in shanties and mobile homes as he was moved from one oil boom town to another. He rubbed elbows with relatives who were outlaw bikers long before putting those types in jail. He’s been in bar fights and shoot-outs and has shaken the hands of two American Presidents. His stories are a product of his background.

To date, Keith has written eight novels and converted two into screenplays. At the insistence of a number of producers and directors, he intends to adapt all his novels for the big-screen.

Drop Keith a line at: http://www.keithremer.com/