And for the next week all of these great reading choices are brought to you by our brand new Thriller of the Week, Judith Thomas’ House of Cobwebs. Please check it out! 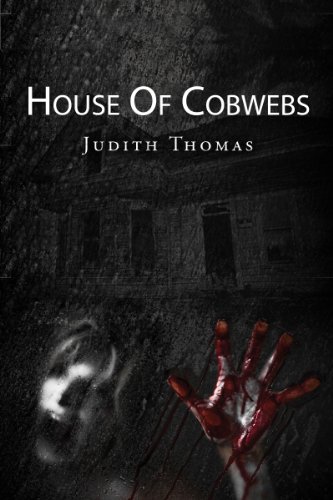 4.8 stars – 8 Reviews
Kindle Price: $7.30
Text-to-Speech and Lending: Enabled
Don’t have a Kindle? Get yours here.
Here’s the set-up:
Sometimes nightmares follow you from sleep and begin to haunt your days.
Neema Harris is eleven years old, and gifted with the ability to invade other people’s minds and discover their deepest, darkest secrets. She is the sole survivor when her whole family is butchered in the night.
Child psychologist, Doctor Winter Fremont is beautiful, successful and outwardly confident. She firmly believes she has left the horrors of her childhood far behind, and now has control of the psychic dreams which disturb her sleep.But when the twinkly- eyed and uniquely wicked Neema Harris becomes her patient, Winter’s ugly past comes back to haunt her, big time.
In his attempts to solve the increasingly baffling Harris murders, the cynical Detective Inspector Len Axton will awkwardly fall in love, and have three psychic experiences that will change him forever.The first will reveal to him the killer.
The second will lead him to the killer.
The third may not be enough to save his life.

5-Stars Reviews From Amazon Readers
“Totally creepy book, what a great read! Recommended for everyone who likes a good crime thriller. Can’t wait for author’s next book!”
“An ideal read for lovers of both supernatural and crime genres, House of Cobwebs packs a serious punch, providing plenty of nail-biting, heart-pounding twists along the way. Readers are raving about this thriller, calling it “eerie”, “gripping”, and “a real page turner”.”
About The Author
Judith Thomas migrated from England with her family when she was four years old in 1962 as a ten pound pom; becoming part of Australia’s prosper or perish drive to populate its cities and farming communities. Dropping out of High School in year three (before she was expelled) Judith spent the next twenty five years in the banking industry; became a bank manager, got married, had a baby, got divorced then found and married her soul mate in 1995. Late in her mid-life crises forties, Judith left the corporate life and decided to bite the bullet and do what she’s always dreamed of doing, writing for a living. Whilst she had no formal qualifications, Judith’s mother had taught her to read by the time she was three, and through all life’s ups and downs, books have been Judith’s solace, her escape, her inspiration and have kept her imagination alive. Every genre has been sampled over the years but Judith is always drawn back to the dark side. There have been many influences from Enid Blyton’s Faraway tree and the Magic Wishing Chair, to C.S. Lewis and the Narnia series. William Peter Blatty’s,The Exorcist, had a profound effect on Judith and after that she was drawn to any book or film which smacked of other-worldly evil. To this day she insists The Exorcist is the greatest horror film ever made. However, the single most inspiring influence in Judith’s reading and writing life, would have to be the fabulous Stephen King.
Judith lives on a small farm in Regional Victoria with her husband Bill and a large menagerie of animals. She enjoys her little grandson’s visits immensely and also the peace and quiet which allows her the luxury of writing.
House of Cobwebs is Judith Thomas’s debut novel and she is currently working on her next novel, Quake. (“See, all my high school drop-out buddies out there who think you can’t achieve your dreams – dreams really do come true; but you have to work damn hard at making them real.”)
Quake is supernatural adventure thriller which will take its readers to a whole new level of terror. Quake will be out late next year.
(This is a sponsored post.)