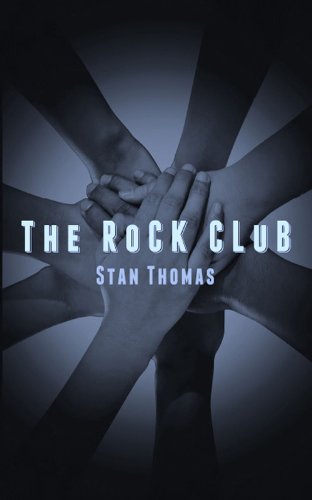 In 1982, Clark Ralston was eleven years old, his beloved little brother was nine, and his gorgeous and precocious twin sisters were seven…

Fiends and monsters in most adolescents’ lives are conjured up fantasies or characters from a Grimm Brothers fairy tale or the like, which produce an occasional nightmare. The ogre that bedeviled the Ralston children was not a fleeting fantasy or a dark creature in a bad dream after a scary movie. Their antagonist was an ever-present alcoholic and abusive father.

In an effort to visit some retribution on the source of their fear and angst–something no child should ever feel in their own home–Clark initiates an innocuous little distraction called The Rock Club, an exclusive band of juvenile mercenaries determined to torment and befuddle their father…

Nineteen years later, commitment-challenged Clark is trying to distance himself from his stunning, hero-worshiping sisters. When his girlfriend accepts an internship at San Francisco General Hospital, he jumps at the opportunity to create space between himself and his suffocating siblings and moves from L.A. to the Bay Area.

Clark loves everything about San Francisco: the Victorian architecture of its urban neighborhoods, the cable cars, the eccentricity and diversity of its citizenry, and the plethora of different smells and unique ambiance of the city. He’s even beginning to feel like he’s getting over his fear of commitment until The Rock Club pulls an encore. And this time it’s not so innocent… this time it’s deadly.

5-Star Amazon Reviews
“The Rock Club is without doubt one of the best books I’ve read in a very long time, and I love to read. Read it in one sitting. The author has a style of writing that takes the reader into the scene. I don’t believe I’ve read a writer that evokes more raw emotion than Thomas does. The story is about siblings who rebel against their abusive father in a very creative way, and the fallout it creates in their lives years later. It is poignant, provocative, funny, tragic, uplifting, and it’ll keep the reader guessing until the very end.”
“I loved, loved, loved this book. It had everything in it, I couldn’t put it down. It isn’t often that you find a book that competes with the big boys. You will not be disappointed. This author has it down grabbing all the love, hate, violence and emotion wrapping it all up in a great book. I can’t say enough about it. Stan Thomas you delivered!!!”
Visit Stan Thomas‘ Amazon Author Page
And here, in the comfort of your own browser, is your free sample of The RoCK CLuB by Stan Thomas: