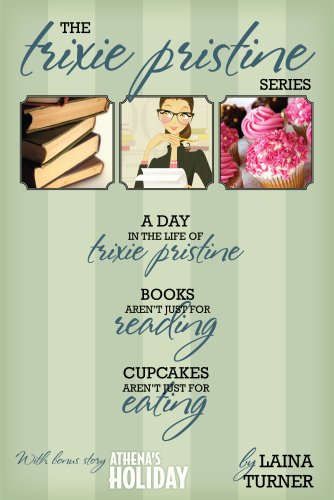 Kindle Price: $3.99
Text-to-Speech and Lending: Enabled
Don’t have a Kindle? Get yours here.
Here’s the set-up:

Trixie Pristine, and her friends Berklie and Sophie, are excited about opening a business together. Little did they know that not only would they be delving into the world of business ownership but also into solving murders.

A Day in the Life of Trixie Pristine

In this short story prequel, Trixie and her friends Berklie and Sophie, considered themselves typical thirty something females until someone turned up murdered in their newly opened bookstore/wine bar. They thought they would be living out their dream in their new shop not trying to catch a killer. Who killed Sylvia and why? Or was one of them the intended target?

Trixie and her friends, Berklie and Sophie, are excited about the opening of Read/Wine their new business venture of a bookstore/wine bar. All is going well until they happen to find a dead body in the shop and that wasn’t part of the business plan. All signs pointed to Berklie since it was her ex-husbands lover who was murdered. Trixie knew Berklie hadn’t murdered Sylvia so who did?

Trixie, Berklie, and Sophie are enjoying the success of their bookstore/coffee shop/wine bar, Read-Wine, and planning for Sophie’s upcoming wedding when they start receiving hang up calls. At first they chalk it up to a wrong number but soon the caller reveals himself. It’s Stephen making good on his threat. He wants his money back. The fact that the police confiscated it doesn’t matter to him. He wants it back and has given them a deadline. A deadline they need to meet before anyone else ends up dead.

Finding out Sophie’s fiancé isn’t who he says he is a shock but his alter ego might come in handy getting Stephen to leave them alone. But with this much money at stake will he? Or are they in danger?

And get a bonus short story introducing Athena parks.

Meet Athena Parks, thirty something law professor who on a whim invites a guy she just met, Tristan West, home with her for the holidays. As crazy as it might seem she was willing to risk him being an ax murder in order to have a buffer between her and her mom. They had that kind of relationship.

Things were going well and she couldn’t deny there was chemistry between them. Maybe this was a sign she had finally found a good guy. Until her uncle Peter recognized Tristan. Who wasn’t Tristan at all. Who was he?

And here, in the comfort of your own browser, is your free sample of The Trixie Pristine Boxed Set by Laina Turner: