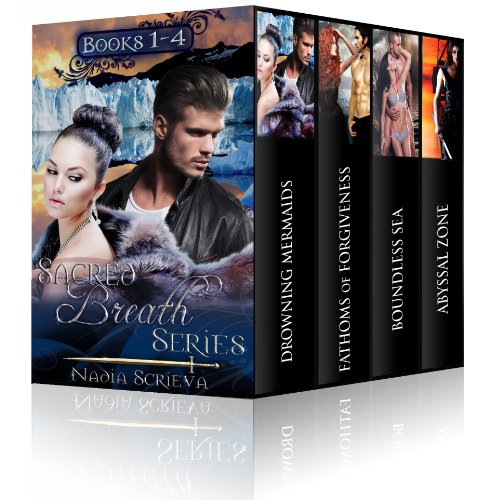 4.5 stars – 33 Reviews
Kindle Price: 99 cents
Last chance to save 90% on this boxed set! (reduced from $9.99)
Text-to-Speech and Lending: Enabled
Don’t have a Kindle? Get yours here.
Here’s the set-up:
A heart-wrenching paranormal romance boxed set…
On sale for $0.99 for a limited time — will be returning to regular price of $9.99 soon!
Four full-length novels are included in this bundle for a seamless reading experience:

To escape the war in her underwater kingdom, the noble daughter of a murdered king must flee to Alaska. Doing all she can to keep her younger sisters safe, Aazuria tries to assimilate and work among the Americans, with her feisty red-haired bodyguard at her side. This refuge holds pleasant surprises, for the princess meets a somber gentleman in a dark corner who promises to show her his world.

Trevain Murphy is a successful crab fisherman who has spent his life building an empire above the sea, but knows nothing of the greater empire beneath the surface. When a graceful dancer captures his attention, he becomes fascinated with her.

As it becomes clear that the dark-haired woman is much more than she seems, Trevain is unprepared to uncover the staggering secrets behind her innocent facade. Neither the captain nor the princess can imagine that their lives will become forcibly entwined as a common enemy threatens both of their worlds…

There is no divorce in the undersea kingdom of Adlivun. Marriage is a bond that lasts until death–even if death comes in several centuries, and in that time your spouse happens to become your sworn enemy. This is the conflict that General Visola Ramaris faces when she learns that the mighty Vachlan is behind the attacks on her kingdom. She has sworn to protect Adlivun with her life, but long ago, she also swore to love and honor her husband…

Princess Aazuria forbids Visola from taking matters into her own hands, but she cannot protect her friend from the evil grip of her former lover. Visola must choose whether she will destroy Vachlan once and for all, or attempt the hardest thing conceivable: communication. When he threatens the person dearest to her, she must take action. Confronting Vachlan on enemy territory will be nothing short of suicide, but she has no choice…

Trevain Murphy’s new wife has been forcibly taken. He must do all he can to search for her without falling apart. To complicate matters, he has been burdened with all of her responsibilities, but the Alaskan man is unable to cope with the political unrest of his new nation. He turns to his wife’s younger sister for help. Princess Elandria is expected to assume important administrative duties, but she is overwhelmed with depression and completely useless to her endangered people.
With Adlivun facing a growing threat from the Clan of Zalcan, headstrong General Visola Ramaris is focused on seeking advanced military protection. Going against the ancient mermaid tradition to remain hidden from land-dwelling societies, Visola decides to reveal herself to the American public and make an eloquent appeal for assistance. But nothing comes for free. The price for survival is outrageous and unexpected; if the sea-dwellers agree, they will be used indefinitely as slave-labor to improve the infrastructure and economy of the surface world. But will the proud citizens of Adlivun sacrifice their freedom and dignity for security?
Abyssal Zone

Aazuria Vellamo has returned to the undersea kingdom of Adlivun only to find that the place she called home for over five hundred years has changed drastically. Having been forsaken as dead several years ago, she finds her husband in the arms of another woman. Once the beloved rightful queen, Aazuria is now an outcast hiding among the commoners. She observes the political situation from a distance, trying to maneuver her daughter into the safest place possible– but Aazuria quickly discovers that no part of the expanding nation is safe any longer…

“There are actually quite a few alpha males in this novel, but the females easily stand their own and succeed among them. I keep falling more and more in love with this series with each installment.  This is definitely a must read for all those who enjoy the paranormal and all things aquatic.” –Pure Jonel Blog
“…Visola will make you proud. What a woman! And you simply have to admit that, despite their love/hate relationship, she and Vachlan belong together. Author Nadia Scrieva has done an excellent job of not just character building, but world building, AND relationship building.” – Barbara Garcia for Reader’s Favorite

“This Sacred Breath Series delivers so very much to its readers! There’s so much to enjoy (to laugh and cry about) to learn from (the power of experience–both positive and negative) and to love–the writing, the story, the characters, and the author.” – Jean Nienhuis “MaggieJ”