Last week we announced that Victoria Danann’s Solomon’s Sieve is our Romance of the Week and the sponsor of thousands of great bargains in the Romance category: over 200 free titles, over 600 quality 99-centers, and thousands more that you can read for free through the Kindle Lending Library if you have Amazon Prime!

Now we’re back to offer our weekly free Romance excerpt, and if you aren’t among those who have downloaded Solomon’s Sieve, you’re in for a real treat: 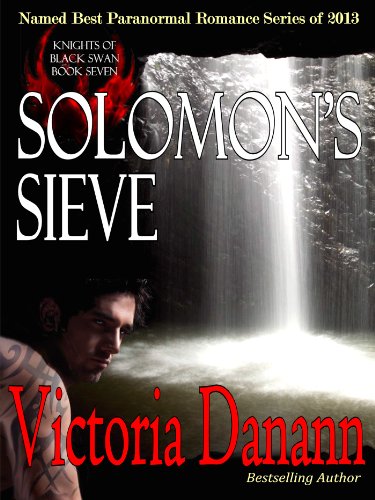 When Sovereign Solomon Nemamiah lay dying on a beach under an overturned vehicle with his fiancée helplessly sobbing next to him, he made a vow to himself that he would refuse to stay in some arbitrary afterlife. He silently promised to return and finish what he started with The Order of the Black Swan and the love of his life. When the new Sovereign of Jefferson Unit begins saying and doing things that remind people of Sol, it raises suspicion in the minds of people who were closest to him.

Dr. Mercy Renaux is a new hire archeologist seeking to change her life and find something to blot out the guy she can’t forget. Sir Rafael Nightsong, bad boy member of the infamous Z Team, is the guy she can’t forget. When his team is assigned to escort the recent recruit to Bulgaria on a mission to contain irrefutable evidence that vampire exist, they both wish they worked for somebody else.

If you love a grand mix of romance, fantasy, science fiction, tears, laughter, and complex stories, this serial is right for you. 17+

And here, for your reading pleasure, is our free romance excerpt:

The facilitator looked at him like she’d rather have him thrown out than help him get caught up to speed. Yes. He was late. Yes. He was a mess. “Is that blood on your face?” she’d asked, looking down her nose.

That’s only one of the shitty things that’s likely to happen when you pick the wrong fight in a battle with extra-dimensional assassins. Among others, you could end up locked in a freezing basement cage for hours.

His answer was to stare in bald challenge. “Just tell me where I’m supposed to be.”

She hesitated, but decided it would be less disruptive to the event to go along with the maniac than to cause a scene. “Very well, Mr….” she looked down at the card, “Nightsong. Everyone will be changing stations in…” she looked at her stop watch, “five, four, three – go to station seven now – two, one.” She raised her voice. “Time everyone! Move on to the next table.”

Raif spotted the number seven and headed in that direction, clearing a path as people took one look and gave him a wide berth. When he got a look at the woman who had just sat down to wait for him at table number seven, he felt his dick jerk and that infuriated him. He flopped into the empty chair seething about the past twenty-four hours, about having to comply with a speed date because he’d lost a bet, about how unsatisfying his work for Black Swan had become, and about the fact that the cutie was getting a response from his pants that was not in line with how tired and dejected he was at the moment.

He refused to look at her. Instead, he looked around the room with a smirk. Speed dating. What could be more ludicrous for a guy like him? He had a progression of pleasure-giving penis piercings, commonly known as a ladder, and a reputation with women that was nothing to be ashamed of. Well, depending on who you talked to. But he’d never been on a “date” in his life.

His present discomfort was his teammate’s idea of a joke, the price of a wager that misfired.

The sound of her voice brought him back. He let his eyes roam over what he could see above the table top slowly, way too slowly for speed dating. It was an intimidation tactic intended to make her uncomfortable, deliberate or not. She was buttoned up all the way to the neck and he thought the closed tight look was out of place on a natural redhead with freckles that seemed to say, “Underneath this disguise, I’m as unruly as the pigment in my skin.”

Her lips parted and stayed open for a minute, like she was thinking about repeating his name, but she recovered quickly and that look vanished. “So. What do you do?”

“Vampire hunter,” he said as nonchalantly as if the answer had been insurance salesman.

She supposed he must have been attempting some sort of theatrical goth look. The style was outrageous, but those eyes were such a pale shade of blue, framed by midnight black hair and lashes, they drew her in, compelling her to look and preventing her from looking away. One could almost believe that he actually was a vampire hunter.

Gathering her composure, she smirked. “I see. You must be too shy to talk about yourself. So, let me just refer to your card then.” She picked up a white four by six index card with the number seven in bold at the top. “I see you like long walks on the beach and pina coladas.” He barked out a laugh in spite of himself. He had to give it up. Torn Finngarick was a funny guy. “Let me guess. I’ll bet you also like getting caught in the rain.”

“Yes. I’m a simple guy, easy to read. Long walks on the beach and pina coladas are my idea of fun.” Her rust-colored eyelashes swept down and to the side as she looked away. “Sooooooo. Let’s see what your card says about you.” He shuffled through cards and held one up pretending to read. “Here we are. Little Miss Sheltered McManners. For fun you like spraying with Lysol and wearing stilts. All the better to look down on other people.”

“Mr… You know, really, the most interesting thing about you is that you chose Nightsong for a fake name. I don’t need stilts to look down on you. I could be lying face down on the floor and wouldn’t have any trouble.”

One of his brows arched. “Well. Well. Well. Honesty. Wasn’t expecting that.”

The facilitator’s voice rang out, “One minute.”

“Sixty seconds.” His malicious grin was sexy in spite of its intent. “Just long enough for me to say that I’ll bet your cunt is buttoned up tighter than your sweater. I’ll bet it’s so sanitary that it doesn’t even smell like pussy. A shame because I like the smell of pussy. For one thing it’s honest.”

Mercy didn’t think of herself as prudish, but hearing that tirade come from the mouth of a complete stranger sitting on the other side of white linen was shocking. While she was trying to make up her mind between blushing and blanching, he decided to add one parting comment.

“You know, hives is not a good look for you.”

She wasn’t about to allow that to be the last thing said between them. “You’re an authority of good looks? Have you seen a mirror? When did post-apocalyptic remnant become the new GQ? You look like an extra from a zombie movie set.”

He glanced toward the facilitator at the front of the room, who had repeated herself, more forcefully, for their benefit.

“Good. ‘Cause we’re done here.” He shoved the chair back as he stood, throwing his splayed hands out in front of him to punctuate his exit like a petulant teenager who’d been wronged.

“Excellent. Because I couldn’t have stood the smell a second longer.”

Three minutes later they were still standing at table seven, locked in an argument that seemed to be spiraling into a frenzy instead of winding down. While the other would-be speed daters turned spectators looked on, the facilitator kept helplessly calling “time” and was ignored.

Finally, Raif ended it by storming out of the restaurant and walked for two blocks in dense New York City pedestrian traffic before ducking into an alley. He stopped and put his forehead on the cold composition wall of the closest building.

“Gods’ teeth, why am I such an asshole? A big mouth, broken asshole?”

Fingers shaking, she gathered her purse and jacket without meeting the eyes of any of the onlookers. If she’d ever been more humiliated, she couldn’t remember when. She got almost to the end of the block before bursting into tears. So much for speed dating.

She was glad it was windy and cold for the six block walk back to Columbia. People would assume the color in her face was from weather and not from crying.