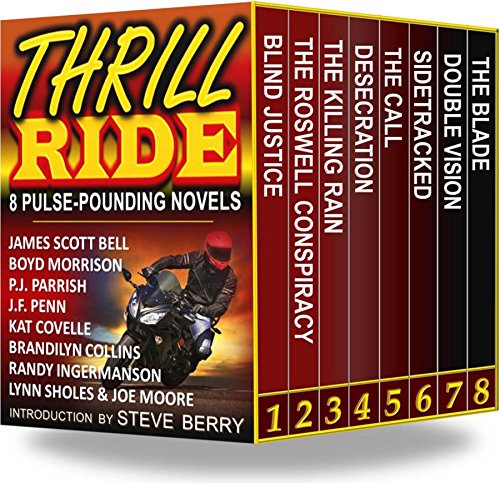 5.0 stars – 27 Reviews
Kindle Price: 99 cents
Text-to-Speech and Lending: Enabled
Don’t have a Kindle? Get yours here.
Here’s the set-up:

Grab a seat and hold on tight! Because this 8-book thrill ride by some of the most popular names writing thrillers today doesn’t let up till the very last page.

600 reviews with a solid 4.4 star average across the 8 individual novels.

A nearly $30 value, available in this very special bundle for a limited time only.

When Delanie Miller’s close friend, Clara, is murdered and a simple-minded man is falsely accused, Delanie must risk exposing her dark past and the lies of her current life–no doubt alienating everyone now precious to her–to clear him.
_________________

While investigating the theft of a 4000-year-old biblical artifact, a federal agent runs up against an international fugitive threatening to destroy Las Vegas with a nuclear device unless the casinos pay a multi-million-dollar ransom.
_________________

Combat engineer Tyler Locke races to unmask a decades-old conspiracy before Russian spy Colchev can find a mysterious object from the 1947 Roswell crash. With it, Colchev intends to unleash an electromagnetic pulse weapon of unprecedented power.
_________________

Attorney Jake Denney has hit rock bottom, both personally and professionally. In a last-ditch effort to save his fading career he takes on a seemingly hopeless murder case–one that thrusts him square into the fight of his life.
_________________

Detective Sergeant Jamie Brooke and clairvoyant Blake Daniel delve into London’s macabre world of grave robbery, body modification, and the genetic engineering of monsters to stop a murderer from claiming another victim.
_________________

On the eve of a brutal storm, a boy is kidnapped–triggering a killing spree by two ruthless men using the boy as a pawn. Now Detective Louis Kincaid must find his twisted adversaries before they commit the ultimate horror.
_________________

An attractive but strait-laced genius with Asperger’s syndrome, Dillon Richard is on the verge of cracking the “unbreakable code” of bankers and terrorists. Who’ll get him first? The mafia? The NSA? Or one of his two beautiful co-workers?
_________________

After a near-death experience, down-on-his-luck mythology geek and self-proclaimed loser Sam Wilson is pulled into a dangerous quest: Silence a demonic sound lethal only to angels so that exiled angels can return to earth–or mankind will die.