Eerie, heroic, and beautiful story of human love — Randy Thornhorn’s The Kestrel Waters: A Tale of Love and Devil – Sample now for Free

”I was haunted throughout…a mesmerizing…extraordinary work of the imagination. Thornhorn, where the hell have you been?” ~ William Peter Blatty (author of The Exorcist)

The Kestrel Waters: A Tale of Love and Devil 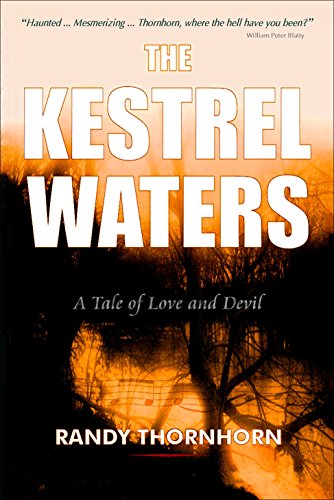 The Brothers Brass. Two young bluegrass singers (with echoes of The Everly Brothers). Raised in Savannah by the sea, together, these boys’ voices chime like heavenly bells.

The oldest brother, Kestrel, falls in love with a wild little thing who hides up in the trees—a bit of a girl named Bettilia. An abused girl raised by a flesh and blood devil on a haunted mountain called Riddle Top.

Soon all the Family Brass falls for Bettilia. She touches Kestrel, she touches everyone. And they touch sweet Bettilia, forever.

Then comes that fateful day when, deep in his own heart, Kestrel says I do to his own devil, within and without.

The Kestrel Waters is an eerie, heroic, and beautiful story of human love, like none you’ve ever known. An epic fable of an epic family whose hearts are comic, profane, and profoundly true.

Reviews
”Mellifluous, lyrical…with a darkness that creeps like kuzu.” ~ Kirkus Reviews
”Captures the tragedy of romantic and familial love better than any story I have ever read.” ~ Janeiro Bento
”One of the South’s wildest new voices…” ~ The Oxford American Magazine

And here, in the comfort of your own browser, is your free sample of The Kestrel Waters: A Tale of Love and Devil by Randy Thornhorn: